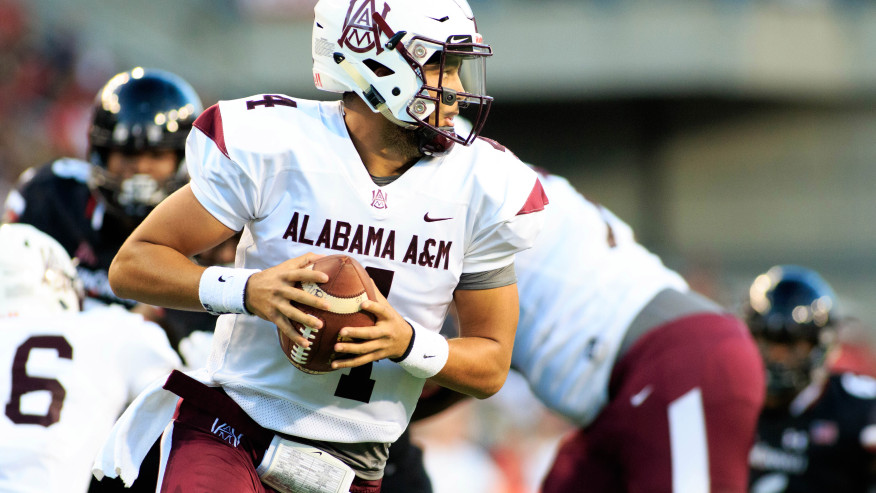 We are finally here! This weekend we will see the spring season of SWAC football come to an end as the SWAC East champions Alabama A&M Bulldogs will take on the somewhat surprising SWAC West champion Arkansas Pine Bluff Golden Lions. On paper this game might seem like a shootout in the making but statistics will show you that this might not be a first to 50 wins sort of game.

How We Got Here

Alabama A&M started off the spring as the favorites to win the SWAC East for most knowledgeable FCS pundits (ahem). Jackson State came in with all the shine (and Prime), but the Bulldogs were primed in the fall to challenge Alcorn State for the title outright.

What we couldn’t predict is what COVID did to a lot of teams’ schedules, but especially Alabama A&M’s.

The Bulldogs beat the South Carolina State Bulldogs 31-7 in a game that was put on the calendar due to COVID cancellations, and then Alabama A&M wouldn’t play another game for OVER A MONTH. Not missing a beat, they hopped on ESPN and lit up Jackson State’s with Aqeel Glass putting up video game numbers.

As a result, the Magic City Classic against arch Rival Alabama State would serve as the de facto SWAC East championship game. The Bulldogs showed their experience and handled a talented, but young Hornets side to become SWAC East champions.

If the SWAC East went as scripted by writers, the West was anything but.

Four out of these Five teams had winning records in 2019 so we expected it to be competitive.

What was not expected was seeing Arkansas Pine Bluff make it out of this gauntlet.

The Golden Lions made their statement out of the gate with a 33-30 win over preseason favorites Southern, who would finish the spring with just that one loss. Following that up with a massive win against a despondent Grambling and surviving an improving Mississippi State, their game against Prairie View A&M became the de facto championship game for the SWAC West, a distinction usually reserved for the Bayou Classic.

The game did not disappoint and the Golden Lions came out on top.

We all knew this would be an improved team, but seeing them atop the SWAC West is probably something only their team and fans saw coming.

The championship game will be played at Veterans Memorial Stadium in Jackson, Mississippi. I mean, Jackson State at least kind of gets to be there? It will be aired on Saturday, may 1st at 3 PM EST/2 PM CT on ESPN 2. QBAll eyes will be on Aqeel Glass, a man who has done wonders for a potential NFL future showing off great touch and intelligently using his legs at the opportune moment. His counterpart, Skyler Perry is nothing to sneeze at either, racking up 15 total touchdowns in this shortened season. Alabama A&M might have the best WR group in the FCS, let alone the SWAC, but Josh Wilkes from Arkansas Pine Bluff is a wide receiver room all on his own.

Lest you think this game will be all about offense, these defenses aren’t too shabby either. Alabama A&M boasts the second best scoring defense in the SWAC while Arkansas Pine Bluff has the fifth. Each defense has shown a knack for stepping up when they need to, and I expect both units will be keen on showing off their own prowess as the offensive side of the ball gets all the shine. Pressuring the quarterbacks and turnovers will likely be deciding factors in this game.

It’s hard to imagine this game staying in the 20s, but I don’t expect a shootout either. As cliche as it sounds, the team that wins the turnover battle is the most likely to win this game. Neither offense is prone to turnovers, so it’ll make for an even more tantalizing game. At the end of the day, Alabama A&M have been building towards this moment, and I see them taking it on the back of Aqeel Glass and that potent wide receiver corp.

Preston attended James Madison University where he majored in Vocal Performance. As a member of the Drumline and Marching Royal Dukes for 4 years, he’s seen a lot of JMU football up close and personal and having grown up attending HBCU games, he has extensive knowledge of the history and pageantry that comes with attending a game in the MEAC and SWAC. When not talking college football or being musical, Preston is a fan of the game the world calls football, golf, and curling. (Curling? Curling!)
Related Topics:featured
Up Next