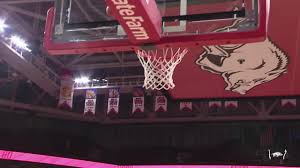 FAYETTEVILLE – Davonte Davis converted a fast break layup with 3:28 left to help the 24th-ranked Arkansas Razorbacks out-score Florida 14-2 over the final 3:28 and claim a 75-64 victory at Bud Walton Arena.

Davis led all scorers with 18 points while Justin Smith continues to excel since returning from an injury. The graduate senior had 15 points (7-of-9 shooting) with six rebounds, two blocked shots, a career-high five steals and a career-high (tied) four assists.

Arkansas led from the out-set until Tyree Appleby gave Florida its only lead (62-61) with a layup with 4:40 left in the game. Davis answered to put Arkansas back on top, 62-61, and never relinquished the lead. The Hogs made 7-of-8 free throws inside the final minute to seal the win.

The key to the game was Arkansas’ 3-point defense. After allowing 27 triples in the last two games combined, the Razorbacks held the SEC’s league leader in 3-point percentage to just 19% (4-of-21) from long range. (Florida was shooting 37.5% from distance entering the game to rank 41st in the NCAA.)

Florida was also leading the SEC in field goal percentage (.474 to rank 37th in the NCAA) but was held to is second-lowest shooting percentage of the season at 37.7% with the lowest being 37.5% versus Kentucky.

Joining Davis and Smith in double digits were Moses Moody and Jalen Tate, each with 14 points. Jaylin Williams tied his career high with a game-best 10 rebounds in 23 minutes played.

Tyree Appleby, who gave Florida its only lead (62-61) with a layup at the 4:40 mark, led the Gators with 16 points and Colin Castleton had 13 off the bench. Tre Mann added nine points and eight rebounds.

Arkansas returns to the road to face Texas A&M on Saturday (Feb. 20). Tipoff is scheduled for 7:30 pm (CT) and the game will be televised on SEC Network.

Smith leads Hogs to win over Missouri in overtime