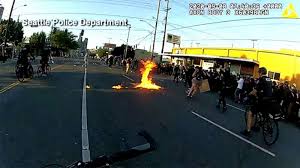 At least 27 people were arrested during Labor Day protest in Seattle in which police said rioters hurled rocks and Molotov cocktails at officers.

The latest civil unrest in Seattle, which has become a flashpoint among demonstrations throughout the U.S., came on the same day police in Salem, Oregon, said supporters of President Donald Trump clashed with protesters demanding justice for a string of recent police-involved shootings of Black people.

About 300 people joined for what was billed on social media as an “anti-police” protest in Seattle on Monday afternoon. The demonstrators marched to police union headquarters.

“Officers arrested a number of individuals on 4th Avenue South as they continued to receive rocks, bottles, and explosives thrown at them by rioters,” the Seattle Police Department said in a statement.

At least 22 people were arrested on charges ranging from arson, assault, obstructing police and failure to disperse, according to the statement. Another five were arrested Monday night as officers attempted to impound a vehicle, authorities said.

Police body camera video released by the department showed officers in riot gear and wielding batons and tackling several demonstrators to the ground, arresting them outside the police union building in the SoDo neighborhood south of downtown Seattle. Officials also released a video of someone hurling a makeshift firebomb that landed in a street and caused a small fire near officers.

As police moved to arrest unruly suspects, people in the crowd dropped several intact Molotov cocktails that were recovered by police. A photo released by officials showed what appeared to be a six-pack of beer bottles filled with gasoline, with fuses attached.

Jim Fuda, director of law enforcement services for Crime Stoppers of Puget Sound, described the tense moments of being inside the police union building as the protest unfolded outside and turned violent.

“We are in that building, and we have to worry,” Fuda told ABC Seattle affiliate KOMO-TV.

Supporters of the president initially gathered for a noontime rally at Clackamas Community College in Oregon City before a group of about 100, including members of the right-wing group Proud Boys, broke off and drove into Salem waving Trump flags from their vehicles, according to OregonLive, the website for The Oregonian newspaper.

Police said two men were arrested on suspicion of misdemeanor assault. Police didn’t say if the suspects were among the Trump supporters.

The confrontation in Salem came about a week after Aaron “Jay” Danielson, 39, was shot to death during a protest in Portland, Oregon. Danielson, of Portland, was part of a group of people who described themselves as Trump supporters who came to Portland en masse and clashed with protesters. Friends said he was also a supporter of the right-wing group “Patriot Prayer.”

On Thursday night, a 48-year-old Washington man wanted in Danielson’s death was fatally shot when a federal task force composed of FBI and U.S. Marshals attempted to arrest him. Authorities allege that the suspect, Michael Reinoehl, pulled a gun on the federal agents as they closed in on him in Lacey, Washington.

Reinoehl is believed to be the same man who appeared in a Vice News interview aired Thursday night in which he claimed he was providing security for the Black Lives Matter protests in Portland and appeared to say he shot Danielson in self-defense. Police have not commented on a motive for the shooting.