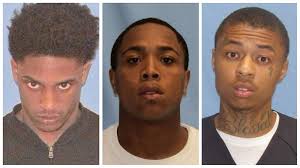 Three men have been charged with murder following a three-year investigation, according to an Arkansas State Police news release.

Joshua Lloyd Anderson, 41, of Berryville; Charles Ky Hanna, 32, of Berryville; and Jason Hartley Helm, 35, of Holiday Island were charged with first-degree murder and cruelty to animals.

Christopher Alvard, 37, and his dog were stabbed to death on Feb. 8, 2018 in his home west of Eureka Springs.

State police Criminal Investigation Division special agents took two of the suspects into custody. The third suspect was already incarcerated and served an arrest warrant by the agents.

Anderson and Hanna were taken to the Carroll County Detention Center, where Helm is already being held.