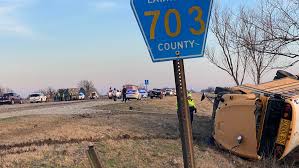 HOXIE, Ark.  — Nine people were injured, including a child who was airlifted to a hospital, when a school bus and a dump truck collided Tuesday afternoon on a state highway in northeast Arkansas, authorities said.

The dump truck was southbound on U.S. 73 south of Hoxie when it struck the rear of a bus that was starting to turn onto a side road. The bus veered off the road and overturned, according to a state police statement.

Seven students and the drivers of both vehicles were injured when the dump truck rear-ended the bus, the state police said. The agency said none of the injuries were believed to be life-threatening.