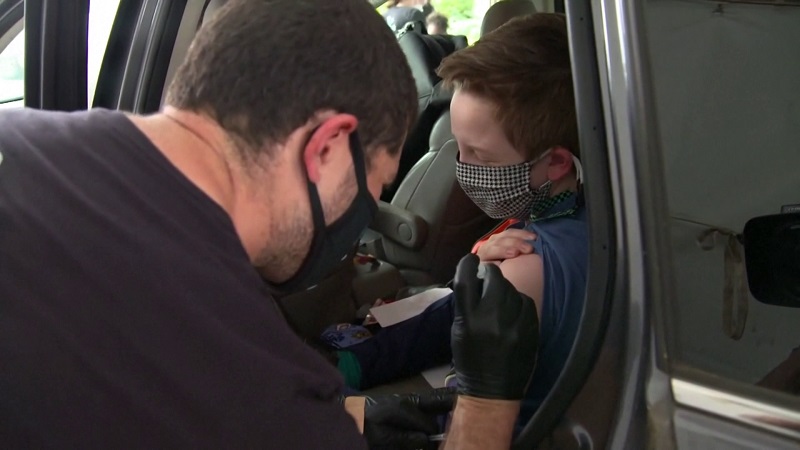 Little Rock, Arkansas – On Saturday the Center for Disease Control unanimously approved smaller doses of the Pfizer and Moderna vaccines for children as young as 6 months.

The vaccine is estimated to arrive as early as Monday, June 20, or as late as Friday, June 24, according to the Arkansas Department of Health.

It could take another day or two to redistribute it to all 97 local health units, once it arrives.

Now every age has the choice to take a coronavirus vaccine. The most recently eligible and youngest, 6 months to five years old, account for roughly 18 million kids, but how many will get the vaccine is unknown. “We’ve been waiting for his age group,” explained parent Eric Nix who was visiting War Memorial Park’s splash pad Saturday hours after the CDC approved the vaccine.

Nix and his son Otto are on board with the shots.

According to Nix, his two-year-old starts preschool soon and has already had several shots to keep himself and the family healthy. “We just want to make sure there’s one less thing he’s bringing home,” Nix stated.

Other parents think otherwise. Alvin Pruitt has five children and said the coronavirus is something their immune system can fight off. “I believe for the kids, they’re okay,” Pruitt told our station. “How I feel about that more so is it is kind of late.”

The strongest variant of COVID-19 against kids 6 months to five years old came in mid-December 2021 with the omicron wave.

More so advisors voting unanimously to approve the vaccine argue we do not know what is next or the lasting consequences which could come with infection.

After the vote, Dr. Beth Bell, an advisor for the Committee on Immunization Practices, stated, “This is the opportunity which one does not get very often to participate in preventing the death of young children.”

Still, some parents don’t feel they have enough information. Pruitt admitted, “For some folks, I heard that it did wonders for them, so I won’t knock it for anyone who wants to try it. Me, I have more questions.”

Nix, on the other hand, plans on getting his child the shot as soon as they can. “They have to have all these vaccines anyhow. We have no problem with getting him this FDA-approved vaccine”, he stated. “I’m just hoping that the more people who come forward and say they’re fine with getting their kid this vaccine, it will have a snowball effect.”

Children ages 5 to 11 were the previous age group to gain access to the coronavirus vaccine in November.

According to government data, at this point, less than a third of them have been vaccinated.