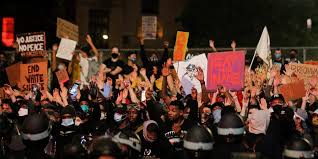 LITTLE ROCK, Ark. — Arkansas authorities used tear gas for the third night in a row Monday to disperse violent protests outside the state Capitol over the death of George Floyd.

Arkansas State Police fired tear gas to break up the protest, which had grown to several hundred people in downtown Little Rock and went beyond a 10 p.m. curfew the city’s mayor implemented because of the demonstrations and the coronavirus outbreak..

It marked the third night of protests at the Capitol over Floyd’s death in Minneapolis. Floyd died May 25 after an officer pressed his knee into his neck for several minutes even after he stopped moving and pleading for air.

Mayor Frank Scott marched with demonstrators and pleaded for calm. But the Arkansas Democrat-Gazette reported some protesters became unruly. Buildings along Capitol Avenue, including a bank, were damaged and crews put out a fire at the Arkansas Pharmacists Association building.

The Democrat-Gazette reported one of its reporters was assaulted and taken to the hospital late Monday night.

More than 7 tons of medical marijuana sold in Arkansas