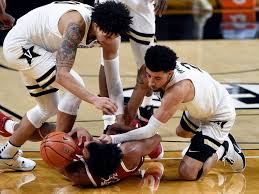 The healing started in the second half in Fayetteville in Arkansas’ mid-week game and it continued in front of an official attendance of 83 fans in Nashville, Tenn., on Saturday as the Razorbacks put down Vanderbilt, 92-71, to string together the team’s first 2-game winning streak since the start of SEC play in late December.

Arkansas (12-4, 4-4 SEC, NCAA NET No. 39 entering Saturday) won back-to-back league matchups this week while defeating Vandy (4-7, 0-5 SEC, NCAA NET No. 165 entering Saturday) for the 7th consecutive time, and the Hogs improved to 2-3 in road games on the season. Arkansas has now outscored two opponents by a combined 35 points in its last 3 halves of basketball, which includes a plus-14-points scoring differential to erase a 12-point halftime deficit on Wednesday in a 75-73 comeback home win over Auburn. The back-to-back wins over the Tigers and Commodores helps ease the sting of a 4-out-of-5-games losing skid that saw Missouri, LSU, and Alabama defeat Arkansas by an average margin of 20.0 points.

“You can have as many points as you want in a loss and it doesn’t matter,” said Moody, who was coming off a season-low of 5 points in the win over Auburn that followed his career-high of 28 points in a 31-point loss at Alabama last Saturday (Jan. 16). “Just coming into this game, having a lot of guys going, even guys that weren’t scoring were getting other people involved and guarding their man. Just helping us put together a winning stretch.”

Second-year head coach Eric Musselman improved to 12-15 in SEC games and 3-0 against the Commodores, who fell to 3-41 in SEC games going back to the end of the 2017-18 season. To make matters worse for the ‘Dores, they were playing without three scholarship players on Saturday, including talented sophomore forward Dylan Disu — the team’s second leading scorer and leading rebounder on the season.

The Razorbacks took advantage early and led by double-digits at the break (45-35), and it was Moody who gave Arkansas its first 20-point lead (86-66) with a basket-and-1 conversion at the 3:03 mark of the second half, then Moody struck again by scoring a layup on the final possession of the game that provided the 21-point winning margin.

Arkansas’ ball movement and execution offensively were good from the outset as the Hogs finished the game with 22 assists (against 11 turnovers) on 36 made field goals. The Razorbacks were effective inside and out, shooting 57.1% overall from the field, including 8-of-19 from 3 (42.1%). Arkansas made 12-of-19 free throws (63.2%).

“I thought we played really well,” Musselman said to open his postgame press conference. “Fourty-eight points in the paint. Probably our best ball movement. Twenty-two assists. We shared the ball really well. Fewest turnovers that we’ve had since the Tennessee game. So, to score 92 points, to be on the road, to only have 11 turnovers, to have the 22 assists, I thought we did a good job on the backboards.”

Outside of the big games from Moody, Tate, and Smith, the Razorbacks got production from starters Desi Sills and Connor Vanover as well as reserves JD Notae, Davonte “Devo” Davis, and Vance Jackson, Jr. as the quintet combined for 29 points (11-of-24 field goals, including 4-of-10 from 3, and 1-of-4 free throws), 17 rebounds, 9 assists, 3 steals, and 2 blocks.

Next up for Arkansas are 3 consecutive SEC home games — beginning with Ole Miss on Wednesday — sandwiched around a road game against Oklahoma State in the SEC/Big 12 Challenge on Saturday, Jan. 30.

Musselman went back to a starting lineup that he used for 8 consecutive games after the season-opener — Desi Sills, Connor Vanover, Moody, Smith, and Tate.

The Razorbacks came out of the gates fast, using runs of 9-0 and 9-2 to build an early double-digit lead, 18-8. But Vandy chipped away at the deficit to pull within 31-27 on Clevon Brown’s layup at the 5:59 mark. From there, Moody scored the Hogs’ next 6 points, followed by Vance Jackson, Jr. and Tate each hitting a 3, and a Vanover alley-oop dunk as Arkansas closed the first 20 minutes with a 14-8 run to take another 10-point advantage, 45-35, at the break.