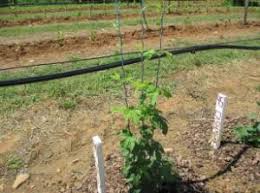 Ronnie Ledford stood among what was left of his hops after his yearly harvest. The plants curled up along wooden columns resembling telephone poles. The posts lined Ledford’s land where he grew the crop. He pulled a bud off one, breaking it a part showing what brewers are looking for in the plant.

Arkansans are breaking into the hops industry, beginning to grow the crop that was once dominated by northern climates.

Ledford, 68, has 2 acres of the vine growing at his farm near Booneville in Logan County. So far, it’s the largest hop crop in Arkansas.

When he first began his project, Ledford said everyone told him hops couldn’t grow this far south. Farmers typically grow hops in the Pacific Northwest, as well as Michigan and New York state.

“Most of my friends think I’m crazy that I’m trying to grow crops in Arkansas,” Ledford said.

Now Ledford is working with the University of Arkansas, trying to develop the most effective method for growing the plant in the state.

The university is on its second harvest, said Amanda McWhirt, a horticulturalist with the University of Arkansas Division of Agriculture Research & Extension.

Eventually McWhirt would like to be able to offer future hops farmers initial estimates on how much it costs to start growing the crop.

The university division offered a webinar Aug. 20 for those interested in growing hops. About 50 people participated. A third of these people were brewers. There are about 40 breweries in the state.

Liz Preston of Prestonrose Farm and Brewing Co. near Paris also spoke at the webinar. Although the smallest brewery in the state, she has been growing hops at her brewery/farm for about five years now.

Preston said Southern-grown hops differ greatly from those grown in the North. Her hops typically are far less bitter than Northern variations of the plant.

The hops being grown in Arkansas contain more floral and fruity characteristics because they are not able to reach the alpha acid levels seen in Northern hops. Preston and Ledford both point out the 42-degree latitude is the ideal parallel on the planet to develop those higher alpha acid hops. Arkansas is around the 34-35th parallel in latitude.

The hop growers also say they want future Arkansas hop farmers to learn from their experiences.

“Don’t go through the same thing that I went through. I had nine years of trials and tribulations, but I’m getting there,” Ledford said.

But the payoff is pretty good. Ledford said he typically gets $25 per pound of hops.

“If you can put Arkansas hops in a beer and put a hog on the can, that’s it. People are going to buy,” Ledford said.