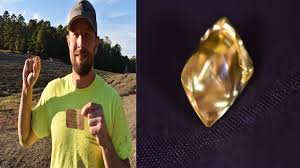 Arkansas – On his fifth trip to the Crater of Diamonds State Park, a Fayetteville man found the third-largest diamond of the year, state park officials reported Tuesday.

Steven McCool, 35, found a 4.49-carat, canary yellow diamond that is about the size of a jellybean, according to park officials. He found it by sifting through the dirt using screens and water.

“As my eyes were panning to it, I was thinking it could be an amber piece of glass like an old Coke bottle,” McCool said. “Once I focused on it though, I knew it was a diamond. I was like ‘No way! No way!’”

McCool went on to say, when he found it, he was on his 11th bucket of the day, his hands were soaked through his gloves, the water was ice cold, and the park was about to close. So he took it home and brought it back the next day to find out how to register his find.

Park officials said before finding the diamond, McCool was planning on going back to Fayetteville, but extended his stay since there had been a good rain and conditions were optimal to find a diamond.

“Mr. McCool hit the nail on the head. This is part of what makes Crater of Diamonds State Park such a special place. Not only is it the only place in the world where you can search for finders keepers diamonds, no one else has made your discovery before you. Each diamond is unique, as is each discovery,” Arkansas State Parks Director Grady Spann said.

McCool named his diamond the BamMam Diamond, which is a tribute to his 7-year-old son and 5-year-old daughter, according to the state park. He does not know if he is going to keep it or sell it.

This is not the first large diamond found this year. On Labor Day, Kevin Kinard of Maumelle found a 9-carat diamond, the second-largest diamond found in the park’s history by surface searching.

Arkansas tax revenue continues to beat projections, up 2% in October