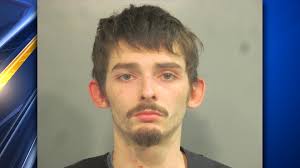 Hunter Chenoweth, 22, of DeQueen, is facing three counts of capital murder, according to county prosecutors. He is accused of killing Tami Lynn Chenoweth, 51, James Stanley McGehee, 59, and Cheyene Chenoweth, 26. The three victims were reportedly found dead in a home on County Road 6041 just east of Fayetteville in February.

State police reported Chenoweth was arrested in Saline County before being transported to Madison County. He is expected to appear in court in September.