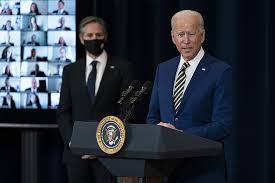 WASHINGTON — President Joe Biden plans to end U.S. support for a Saudi-led military offensive in Yemen, and freeze the withdrawal of some American troops stationed in Germany, the White House said Thursday.

“America is back. Diplomacy is back,” Biden said during his visit to the State Department. “We will repair our alliances and engage once again.”

Biden said nations must organize and work together to solve big problems.

The halting of U.S. support for a five-year Saudi-led military offensive in Yemen aims to stop one of the world’s worst humanitarian crises, according to President Biden.

The move would fulfill a campaign pledge by Biden, whose administration plans to pursue diplomacy to end the overall conflict in Yemen.

Saudi Arabia began the offensive in 2015 to counter a Yemeni Houthi faction that had seized territory in Yemen and was launching cross-border missiles at Saudi Arabia.

A Saudi-led air campaign since then has killed numerous civilians, and survivors display fragments showing the bombs to be American-made. The conflict has deepened hunger and poverty in Yemen, and international rights experts say both the Gulf countries and Houthis have committed severe rights abuses.

Biden is set to announce Timothy Lenderking as special envoy to Yemen. The move comes as Biden is searching for a diplomatic end to the Saudi Arabia-led military campaign that has deepened humanitarian suffering in the Arabian peninsula’s poorest country. A person familiar with the matter confirmed the selection, speaking on condition of anonymity ahead of the announcement.

Lenderking has been a deputy assistant secretary of state in the agency’s Middle East section. A career foreign service member, he has served in Saudi Arabia, Kuwait and other countries inside and out of the Middle East.

Trump last year, despite congressional resistance, announced plans to redeploy about 9,500 of more than 34,000 U.S. troops from Germany.

Blinken sworn in as secretary of state, says US ‘deeply concerned’ about Navalny’s detention

Biden’s State Department visit is intended to underscore his promise to restore a multilateral approach to U.S. foreign policy and mark his administration’s reengagement with the international community.

“He wants to send a clear message that our national security strategy will lead with diplomacy,” Sullivan told reporters.

Biden said Myanmar’s military should relinquish power and release advocates, activists and officials after the generals staged a coup.

Sullivan said there was bipartisan support on Myanmar, and the administration believed it could work with Congress “on a package of sanctions to impose consequences in response to this coup.”

“We will also be working with allies and partners around the world,” Sullivan told a White House news briefing.

Explainer: Why is the military taking control in Myanmar?

“We are reviewing the possibility of a new executive order and we are also looking at specific targeted sanctions, both on individuals and on entities controlled by the military that enrich the military,” Sullivan said.

Biden on Monday pledged to “stand up for democracy” and threatened to re-impose sanctions on Myanmar gradually rolled back by former President Barack Obama.

U.S. officials said this week the U.S. State Department would conduct a review of its foreign assistance to Myanmar.

LGBTQ RIGHTS AROUND THE WORLD

Biden said Thursday he will issue a memorandum of understanding on LGBTQ rights globally.

“It reflects his deep commitment to these issues both here in the United States and everywhere around the world. The United States will speak out and act on behalf of these rights as we go,” Sullivan told reporters.

While a presidential memorandum is largely symbolic, Biden campaigned on a pledge to pass LGBTQ rights legislation known as the Equality Act in the first 100 days of his administration and to make LGBTQ rights a top priority.

During Thursday’s visit, officials said, Biden announced that he will increase the cap on the number of refugees allowed into the United States to more than eight times the level at which Trump’s administration left it.

Biden’s proposed 125,000 figure is planned for the budget year beginning Oct. 1. It will take time to rebuild the procedural pipeline – which is facing a backlog of thousands of refugees – and more than one-third of resettlement offices closed, including letting go of personnel, due to drops in refugee arrivals. The president is required by law to first consult Congress on his plans before making a determination.

Migrants in US on temporary status get 9-month extension

Biden chose longtime confidant Antony Blinken to be his secretary of state, aiming to reinvigorate an American diplomatic corps that had been depleted and demoralized under four years of the Trump administration.

He was greeted by employees eager to hear that diplomacy has returned to the top of the presidential agenda and that the expertise of long-serving foreign service officers will be valued.

“I promise I will have your back,” Biden told the department staff. “And I expect you to have the back of the American people.”

Although Biden’s first nominations and appointments to senior positions at State have trended heavily toward political appointees, the president and Blinken have pledged to promote career staffers.

US missionary gets 15 years for sex abuse at Kenya orphanage

US ends deal with Arizona restricting Biden on immigration