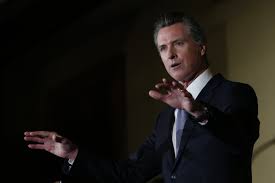 More than 8,400 returning travelers that have entered California from Asia on commercial flights are being monitored for the coronavirus, according to California Governor Gavin Newsom. The Governor urged residents to take precautions regarding the coronavirus, while emphasizing that the risks to public health were low.  He said there was no need to declare a public health emergency, adding, “Everybody in this country is rightfully anxious about this moment. I think they should know we are meeting this moment with the kind of urgency that is necessary and I don’t want to over extend the anxiety.” The governor said that California had only received about 200 testing kits for the virus, an amount he called “simply inadequate.” But he said federal officials have promised him the state will get many more soon.

State and federal health officials are trying to locate everyone who came in contact with a northern California woman believed to be the first in the U.S. to contract the coronavirus with no known connection to travel abroad or other known causes. The woman lives in Solano County, home to the Travis Air Force Base where dozens of people infected in China or on cruise ships have been treated. But Sonia Angell, director of the California Department of Public Health, said there was no evidence the woman had any connection to the base.

California officials said the infected woman is receiving medical care in Sacramento County. The patient was brought to UC Davis Medical Center from another Northern California hospital on Feb. 19 but it was four days before the CDC tested the patient for COVID-19.

Which states vote on Super Tuesday?