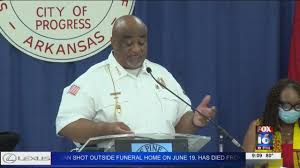 PINE BLUFF — Law enforcement, Racial Injustice, and social reform were just some of the topics discussed at a public forum in Pine Bluff on Thursday.

The event was held at the Pine Bluff Convention Center and the purpose was to offer citizens an opportunity to be heard.

Greg Tatum was just one of many people who attended the forum.

He says it’s important to discuss issues with law enforcement.

“It’s kind of hard not to expunge on it,” he said.

“Getting rid of the hatred is the most important part,” Tatum said.

Police Chief Kelvin Sergeant talked about new policies that include banning of chokeholds and strangleholds.

Require De-Escalation, require a warning before shooting, require the use of force continuum, require exhaust of all alternatives before the shooting, duty to intervene, and restrictions for shooting a moving vehicle.

During the forum, people were split into groups and asked different questions like, “Have you even been intimidated by a police officer”.

Each group had 5 minutes to discuss, before they addressed their concerns with the panelists.

“I will say I do believe I was encouraged as each of you came up and spoke about some of the things you talked about,” Police Chief Kelvin Sergeant said.

The chief also announced another public forum on July 12 at 5 p.m. It will be located at 1002 Ridgeway Road.