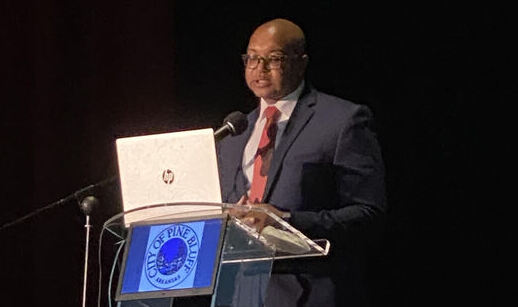 Pine Bluff, Arkansas – While not coming out and directly saying it, members of a committee who have been looking at school consolidation in Pine Bluff for eight months offered a lot of reasons why it is necessary during a public meeting Tuesday at the Pine Bluff Convention Center.

The issue first came up about three years ago when current Pine Bluff City Council member Ivan Whitfield, who was president of the Pine Bluff branch of the NAACP started talking about it. Current president Wanda V. Neal followed through and with the help of Go Forward Pine Bluff, assembled a committee and hired consultants to study the issue.

The consultants, Trina and Tina Fletcher went through a number of areas in their report including academic excellence, enrollment, school culture and climate, teacher qualifications, school revenue and finances.

Regarding academic excellence, Tina Fletcher said each of the three city school districts had less than 25 percent of their students meet or exceed expectations on the ACT Aspire Exam which involves literacy, math and science, and she said there has been a steady decline in ACT scores since 2014.

All three school districts average losing one third of their teachers annually, much higher than the state average. That means that there is a 100 percent turnover every three years.

Revenue for the Dollarway District and the Pine Bluff District declined over 17 percent from 2015 to 2020 while revenue in the Watson Chapel District dropped 14.5 percent.

Ryan Watley, the CEO of Go Forward Pine Bluff then offered a list of what the committee called Innovative Education Reforms which included a hybrid 12-month school calendar of formal and informal education, single gender and co-ed schools, a Language Arts Academy, a school for Performing Arts, a Magnet STEM academy.

Second arrest made in connection with fatal Pine Bluff shootings