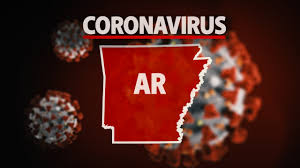 As of Tuesday afternoon, there are 410 new cases of the coronavirus and 16 additional deaths, according to Governor Asa Hutchinson. That brings the state’s total to 53,487 total cases and 619 deaths.

According to Dr. Jennifer Dillaha, there are 5,898 active cases of the virus in Arkansas.

State officials said there are an additional 16 people in the hospital, bringing the state’s total to 492 hospitalizations.

Dr. Dillaha said there are 122 people on ventilators in the state due to the virus.

According to Dr. Dillaha, 46,970 people have recovered from the virus in Arkansas.

Dr. Dillaha said there are three kinds of tests to determine if a person has COVID-19.

Dillaha said the PCR test is the most accurate. Antigen tests are for people with symptoms only, according to Dillaha.

According to Dillaha, the positive side of the antigen test is you can get a result quickly, but the negative is that they are not as accurate. Dillaha said if someone receives a negative antigen test, they should follow up with a PCR test.

Dillaha said the third test is an antibody test, which is a blood test. According to Dillaha, this only shows a positive result after you have passed the period of when you can transmit the virus, so it’s not good for finding out if you have the virus.

Governor Hutchinson announced a $1.8 million rural connect grant for the City of Earle and Comcast.

Hutchinson also said the Arkansas Legislative Council supported an additional $100 million in state funds for broadband grants. The state initially devoted $24 million to rural broadband grants, according to the governor.