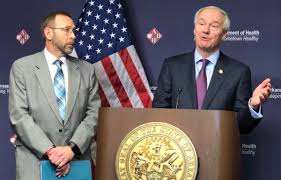 As of Monday afternoon, there are 28,939 total COVID-19 cases and 323 deaths in the state, according to Governor Asa Hutchinson. This is an increase of 572 cases and two deaths from Sunday.

Dr. Smith said three of the cases were in correctional facilities.

According to Dr. Smith, there are 6,510 active cases. Of the active cases, 127 are in nursing homes, 958 are in correctional facilities and 5,425 are in the community.

According to state officials, there are currently 439 people in an Arkansas hospital due to COVID-19, an increase of 19 from Sunday. Dr. Smith noted there are nine residents in the Arkansas State Hospital who have tested positive.

Dr. Smith said 89 are on a ventilator due to the virus, which is an increase in seven from Sunday.

On Saturday, the state saw 1,061 new cases. This was the biggest one-day jump in cases in Arkansas.

Dr. Nate Smith said a large portion of the weekend cases were from the Ouachita Unit in Malvern. According to Dr. Smith, there have been over 500 positive tests over the last four days.

According to state officials, the highest concentration of cases from July 11- 13 came from counties which are population centers: Washington County (211), Pulaski County (205), Benton County (133) and Sebastian County (127).

Arkansas to allow visitations at nursing homes beginning in July