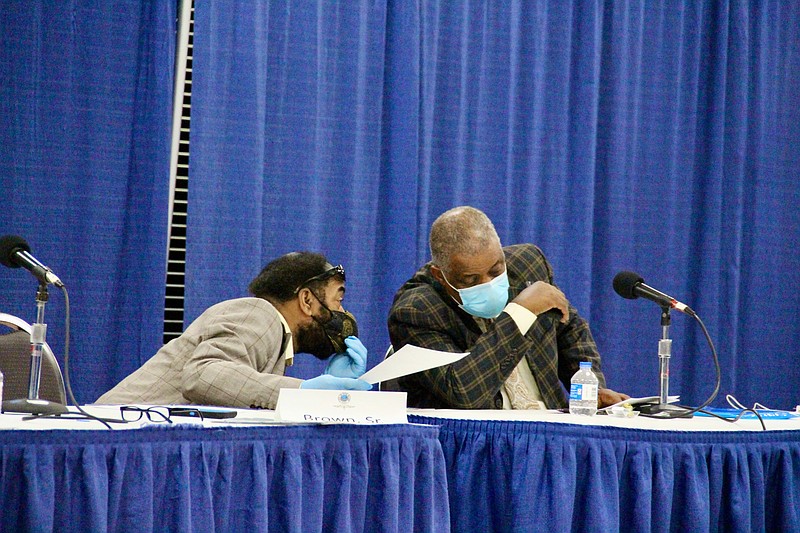 After much discussion and debate during a two-hour city council meeting Monday night, the council approved two resolutions that authorize the mayor to enter into a development agreement with the P3 Group regarding downtown housing and the old Plaza Hotel connected to the Pine Bluff Convention Center.

The P3 Group, which is currently the developer for Jefferson County’s new Health Department, Veteran’s Service Office, and Coroner’s Office, will now commence work on the design and the financial details for the two projects, according to the resolutions. The projects would include work on the now-closed hotel as well as developing residential housing units in the downtown area.

Whitfield spoke against the resolutions, stating that the city council could not afford to get involved with projects of such a great magnitude that the Urban Renewal Agency had purchased.

“I spoke against when Urban Renewal purchased the land that we are projecting to put this (housing) on which tells me right now that the city does not own that land,” said Whitfield. “This project was brought to the table by Urban Renewal, no council involvement at all, and at the end of the day, they’re asking us to allow them to tell us what it’s going to cost to build it. I just believe once you start mixing and mingling you are going to wind up with the short end of the stick.”

“I feel like we are taking projects that have been put on the table by Go Forward and Urban Renewal and they are in a position now where they are not able to finish what they started and we are proceeding on with it,” said Whitfield. “This is nothing against P3. I’m impressed with the work that they’ve done thus far, but I just feel like once again we are voting to do something on some properties that we don’t own.”

Brown concurred, saying too many projects were being put before the council, with taxpayers footing the bill. He also questioned where the revenue from the hotel would go.

Whitfield also voted no on a resolution to reclassify the position of the mayor’s assistant to the mayor’s chief of staff with a $50,000 salary base. With $36,000 already in the budget, the position needed the council to approve an increase of $14,000.

“This is not a position where we are giving a person a raise,” said Mayor Shirley Washington. “It’s a new position with a salary that is starting there and it just so happens we already have the $36,000 in the budget. To fund that position, we’re asking for $14,000.”

Whitfield said he felt that the action would send the wrong message to other city employees seeking a raise.

“My concern is we promised civilian employees a raise,” said Whitfield. “We could not do it.”

Whitfield said his other concern, after reviewing the chief of staff’s job duties, was instead of having a mayor-council form of government, Pine Bluff would become a city manager-type system, like Little Rock’s.

“The restructure will help the mayor’s office be more efficient and effective to get more done,” said Washington, who added that she also wants the city to be in a position to give city employees raises. “As a result, I hope you’ll see that. If you give us the time, you’ll see the value in what we’re asking for.”

The chief of staff resolution was approved by the remainder of the council.