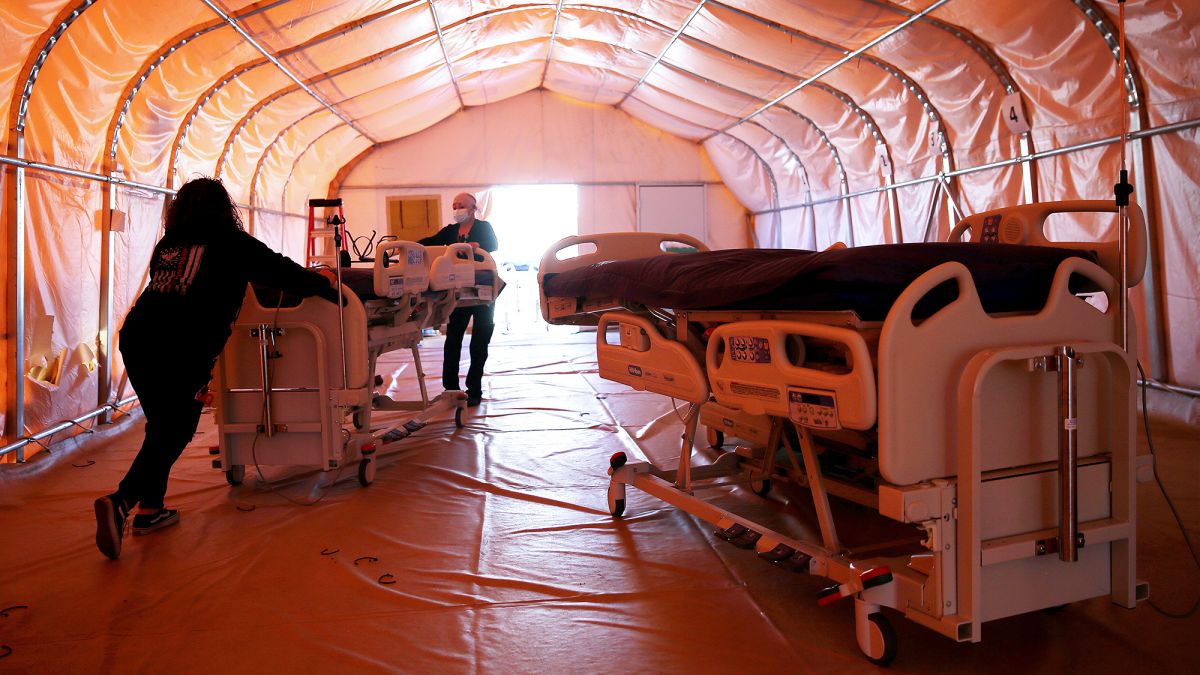 Covid-19 hospitalizations in the United States are at the lowest level since early November, when a fall surge in cases and deaths was picking up steam, data showed Saturday.

This comes as federal officials say they’re pushing large shipments of vaccines to states this weekend, in part to make up for a backlog from winter storms — and as public health experts push for faster inoculations before more-transmissible coronavirus variants get a better foothold.

From domestic service jobs to the board room, Stacker traces the history of women in the workplace drawing on news reports, government documents, and think tank data. Click for more.

Friday’s number is the first below 60,000 since November 9, when daily cases, hospitalizations and deaths were on a several-month incline through the holidays.

Averages for daily new cases and deaths also have been declining for weeks after hitting all-time peaks around mid-January. Public health experts have been pressing for faster vaccinations, before more transmissible variants have a chance to spread, fearing they could reverse recent progress.

The Centers for Disease Control and Prevention has said an apparently more-transmissible variant first identified in the United Kingdom could be the dominant strain in the US by next month.

“This is why we’re telling people to not stop masking, not stop avoiding indoor social gatherings quite yet, because we don’t really know what’s going to happen with this variant,” Dr. Megan Ranney, and emergency medicine physician with Rhode Island’s Brown University, told CNN Saturday.

“And we saw what happened last winter when we didn’t take Covid seriously enough.”

The national test positivity rate — or the percentage of tests taken that turn out to be positive — averaged about 4.8% over the last week as of early Saturday, according to The COVID Tracking Project.

That’s the first time the average has dropped below 5% since October, and it’s far below a winter peak of about 13.6% near the start of January.

The World Health Organization has recommended governments not reopen until the test positivity rate is 5% or lower for at least two weeks.

After harsh winter weather cut vaccine shipments and caused vaccine appointment postponements in parts of the country in the last week, US officials say states should be prepared to start making up for it this coming week.

The US had a backlog of about 6 million doses that couldn’t be shipped because of bad weather this week.

Los Angeles was among the areas affected by shipment shortages — appointments were postponed at city-run vaccination sites, including Dodger Stadium, on Friday and Saturday, CNN affiliate KABC reported.

But a site supported by the Federal Emergency Management Agency and the Defense Department was open Saturday at Cal State University’s Los Angeles campus.

“I was trained to be a lifesaver. … This is also what I joined the Army to do — not only just to help people overseas, but also to help people at home,” Sgt. 1st Class Gerardo Guzman said.

The pace of daily Covid-19 vaccinations slowed somewhat in this past snowy week. The country averaged about 1.59 million shots a day over the last week as of Friday, against 1.65 million a day the week prior, according to CDC data.

As of Saturday morning, more than 42.8 million people in the US had received at least one dose of a Covid-19 vaccine, and almost 17.9 million had received two doses, according to CDC data.

Too risky to give single doses, Fauci says

One way to protect more people quickly, some experts suggest, is to prioritize administering first doses of the vaccine.

Dr. Ashish Jha, dean of the Brown University School of Public Health, advocated Friday for US officials to consider delaying the second dose.

“Would that really be a problem, because if we could do that, we could vaccinate a lot more high-risk people, quickly…Everybody needs a second dose, but I think we can do it in a way that’s still safe and get a lot more people protected,” Jha told CNN’s Poppy Harlow.

But Dr. Anthony Fauci, the director of the National Institute of Allergy and Infectious Diseases, said Friday that a single-dose plan would be too risky.

Fauci said he worried that if large numbers of people got a single shot and had less than optimal immune responses, they could be exposed to the virus and start incubating viral mutations. In theory, new variants could arise, he said.

“We will stick with the scientifically documented efficacy and optimal response of a prime followed by a boost with the mRNA vaccines,” Fauci told a White House briefing.

Jha, for his part, said he agreed that everybody needed a second dose, “I think the question is, right now we wait four weeks between first and second dose. What if we went six weeks or eight weeks or 10 weeks — not much longer than that.”

Vaccines may prevent infection and not just symptoms, study suggests

Health experts have said that data so far has shown that Covid-19 vaccines prevent symptoms of the virus — but a new study suggests that the Moderna and Pfizer/BioNTech vaccines may also prevent infections.

A team at the Mayo Clinic health system looked at more than 31,000 people across four states who had received at least one dose of either vaccine — and found the vaccines were upward of 80% effective in preventing infection 36 days after the first dose.

Vaccine efficacy was 75% 15 days after the first dose, and it appeared to be 83% after a total of 36 days passed. But that number rose to nearly 89% when researchers examined only people who received two doses, according to the study, which has not yet been peer-reviewed.