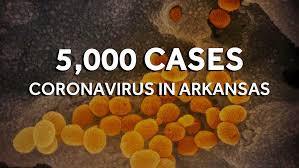 LITTLE ROCK, Ark. – Arkansas marked a grim milestone on Thursday as new data from health officials showed that the state had passed 5,000 deaths due to the coronavirus.

The Arkansas Department of Health reported 24 new deaths in the last 24 hours, bringing the total since the beginning of the pandemic to 5,009.

It was not until September 15 when the state crossed 1,000 deaths, 175 days since the first fatal cases. After that, however, deaths from COVID-19 mounted quickly, with the next thousand deaths happening just 49 days later.

There are 16,992 active cases in the state. There are 813 hospitalized cases, which is down 69 from Wednesday, and 145 on ventilators up three from Wednesday.

The ADH announced that the state received 17,600 more vaccines while distributing 13,037 more in the last 24 hours.