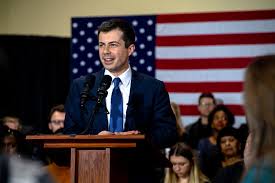 SAN FRANCISCO – The Democratic candidates for president are turning their focus toward the West this week.  Nevada holds caucuses on February 22nd and California voters are already voting early leading up to the Golden State’s March 3rd primary.

California’s new earlier Super Tuesday primary makes it a highly coveted prize and with early voting already underway, many candidates are hoping to lock in those early voters.

Current Democratic frontrunner, Vermont Senator Bernie Sanders plans to return to the Bay Area Monday for a Get Out the Early Vote Rally at noon in Richmond at the Craneway Pavillion. His strong showings in Iowa and New Hampshire have added fuel to his fired-up base of supporters.

Close on his heels, former South Bend, Indiana mayor Pete Buttigieg is getting new attention for challenging Sanders as a top contender in both Iowa and New Hampshire. Buttigieg plans to hold a Town Hall in Sacramento on Friday February 14th and piicked up a key California endorsement Thursday from the state’s Lt. Governor Eleni Kounalakis who will stand on stage with him Friday.

“His youth is one of the things I like about him,” said Kounalakis, who had previously supported Senator Kamala Harris.

“To be able to go from being virutally unknown to a frontrunner in a matter of a year or so shows his tenacity and energy,” said Kounalakis, “If you are working in a small town in the Midwest of the United States, you know very well what is concerning people right now, with the economy.”

In Pleasant Hill Thursday, “I like Mike” signs and campaign t-shirts filled the office for the grand opening of the Bloomberg campaign’s new Contra Costa and Solano County headquarters.

“He’s the guy who’s going to beat Donald Trump.” said Martinez Mayor Rob Schroder, who is part of the growing Mayors For Mike Group endorsing Bloomberg. Schroder, also a former Republican, says he understands why Bloomberg has left the GOP.

Patty Mitchell, the Bloomberg campaign regional director in charge of Contra Costa and Solano counties says she was a Kamala Harris supporter until Harris dropped out.

“I started looking at the polls and not seeing anybody that I thought could defeat Trump and that was terrifying honestly to me,” said Mitchell.

“So there’s the Mike-curious that want to know more, there have been Republicans, Independents, no party preference kind of folks,” said Mitchell.

Massachusetts Senator Elizabeth Warren already has offices in the California with volunteers working the ground game.

Other candidates have come through California for fundraisers including former Vice-Presdient Joe Biden, Minnesota Senator Amy Klobuchar, who is seeing a modest surge in the polls, Bay Area billionaire and philanthropist Tom Steyer, and Hawaii Congresswoman Tulsi Gabbard..

No Party Preference voters can vote in the Democratic primary without changing registration if they request a Democratic ballot.
CA Voter Status Lookup

Which states vote on Super Tuesday?