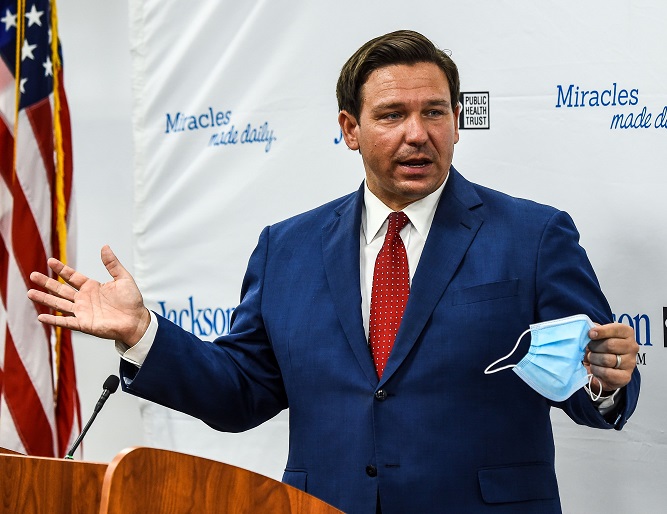 Florida has been the state with the worst Covid-19 situation since the start of the fourth, Delta wave in the middle of the summer. The state had to handle with the high number of cases, hospitalizations and deaths for months now, but it also had to deal with the stubborn Ron DeSantis who decided not to allow mask mandates in schools with the start of the school year.

However, DeSantis is among the few Republican governors who publicly encourages vaccination urging people to get the shot as soon as possible, which is not the case with many GOP representatives. While DeSantis is blamed for not allowing mask mandates is schools, he was the first to implement the antibody Covid-19 treatment to infected patients and now we are seeing the results.

Following a few intense months in the state, in the final week of August Florida finally saw a significant decrease in number of cases, hospitalizations and deaths, the Florida Health Department reports indicate.

For the week of August 27, there are 129,240 new cases—22,612 fewer than the previous week. This is the first significant drop in new cases in the last 10 weeks. A smaller decrease of 1,222 cases occurred during the week beginning August 13 when compared to the previous week.

The most positive fact is the drop in number of deaths. According to the same report, the number of COVID-related deaths has dropped to fewer than 500 people, compared to the week of August 20 where there were nearly 1,500 deaths.

In the meantime, DeSantis is fights to appeal a judge’s ruling regarding his authority to ban mask mandates in Florida school districts. According to DeSantis, no one can force the Florida students to wear masks as it violates Florida’s Parents’ Bill of Rights.

DeSantis added that if any school decides to implement a mask mandate, then the school should allow the parents to opt-out if they believe that wearing a mask is not the best decision to keep their children safe.

As our partner website MDMH – Coral Springs already reported, the latest events in Florida made Gov. DeSantis rating to significantly decrease following his “unpopular decisions” over the last few months. But DeSantis might turn the recent situation in his favor.

Despite the fact that every Covid-19 wave has a lifespan and the most recent one is probably now headed to its end, no one can argue that DeSantis’ expensive antibody treatment which is provided for every single person free of charge is working, resulting with huge decrease in the number of deaths.

The Covid-19 wave that slipped DeSantis’ rating so far, might make him a big winner with increasing popularity which will make him choice number one for another gubernatorial term or even next GOP presidential candidate.

As the number of cases increases because of the Delta variant, airlines are seeing drastic decrease in ticket sales, report

As the Delta variant surges across the country, Costco once again forced to limit purchase on some of their items