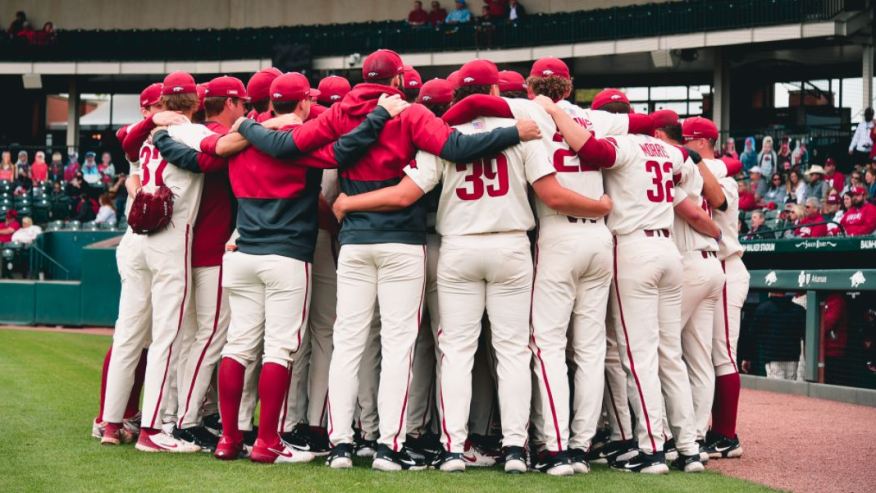 FAYETTEVILLE, Ark. – The Red Wolves are coming to town.

No. 1 Arkansas will host Arkansas State (16-24, 8-10 Sun Belt) in the final midweek game of the 2021 season Tuesday night at Baum-Walker Stadium. Action in the first showdown in history between the Natural State foes gets underway at 6:30 p.m. on SEC Network+.

The Hogs, 36-9 overall on the season, are in sole possession of first place in the SEC West with a 17-7 mark in conference play, leading second-place Mississippi State by one game. Arkansas, the unanimous top-ranked team in all of college baseball, have won a program-record eight consecutive SEC series.

Arkansas is a perfect 5-0 against in-state opponents this season with wins against Central Arkansas, Little Rock and UA Pine Bluff earlier in the year.

The Razorbacks and Red Wolves will meet for the first time in history Tuesday night at Baum-Walker Stadium. Arkansas true freshman Jaxon Wiggins will make the first start of his collegiate career against Arkansas State.

Tune In
The contest between top-ranked Arkansas and Arkansas State will air on SEC Network+ with Brett Dolan (analyst) and Troy Eklund (play-by-play) on the call. Fans can catch all the action through the ESPN app on smartphones, computers and tablets or via Amazon Fire TV and Fire TV Stick, Apple TV, Chromecast, Roku, Xbox 360 and Xbox One.

The midweek contest can also be heard on the Razorback Sports Network from Learfield/IMG, including locally in Fayetteville on 92.1 FM. Phil Elson and Bubba Carpenter will have the call.

Hogs Steady at No. 1
The more things change, the more they stay the same.

Arkansas remained the unanimous No. 1 team in college baseball for Week 13 of the season, leading all six major polls released Monday. Baseball America, Collegiate Baseball Newspaper, D1Baseball, NCBWA, Perfect Game and USA Today each kept the Razorbacks atop their respective rankings for the fifth straight week.

It is the seventh time this season that Arkansas is the undisputed No. 1 team in the nation as well as the 11th consecutive week that the Hogs maintain the top spot in at least one of the six polls.

Sooieville Sluggers
Arkansas has been one of college baseball’s most homer-happy teams all season long. The Razorbacks have hit 78 homers in 45 games this year, the second most in the country. Old Dominion leads the nation with 81 round-trippers in 46 ballgames.

Four Razorbacks have blasted double-digit homers this season, including Matt Goodheart (12), Robert Moore (11), Christian Franklin (10) and Brady Slavens (10). Goodheart, the team leader in home runs, was named the National Player of the Week by both Collegiate Baseball Newspaper and Perfect Game/Rawlings in April after swatting five dingers in four games against UA Pine Bluff and Texas A&M (April 14-18).

Fueled by Beet Juice
The best pitcher in all of college baseball for the month of April was an Arkansas Razorback.

Kevin Kopps was named the National Collegiate Baseball Writers Association Pitcher of the Month after a dominant April on the mound. He appeared in nine games for the unanimously top-ranked Hogs during the month, posting a 0.81 ERA and recording four saves in 22.1 innings while allowing only five walks and striking out 42.

On the year, Kopps has a 7-0 record with a 0.72 ERA, striking out 83 and walking only 13 in 49.2 innings. He has a team-high seven saves, allowing only 30 hits – a .172 opponent batting average against – and surrendering just four runs this season. Six of his seven saves are of the multi-inning variety, most recently securing a 3.0-inning save against Georgia over the weekend.

The Sugar Land, Texas, native is also in the running for the NCBWA Stopper of the Year Award, which is given to the top relief pitcher in the nation. Kopps leads the country in ERA (0.72) while topping the SEC in strikeouts per nine innings (15.04) and WHIP (0.87).