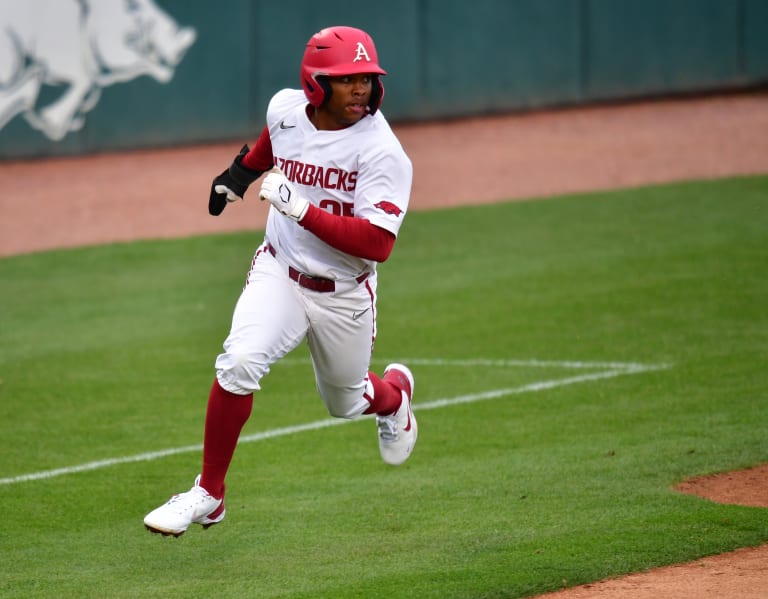 In an otherwise workman-like performance against UA Pine Bluff, Arkansas center fielder Christian Franklin went 3-4 with a single, double, home run and six RBI in a 12-9 win over the 2-19 Golden Lions. But through six innings the top ranked Hogs held a slim 4-1 lead over a team that came in with an ERA of 11 plus.

After giving up a pair of runs in each of the first two innings, visitor’s starter Joel Barker blanked Arkansas for four consecutive frames. Baker’s 85 mph fastball and 65 mph breaking ball proved difficult to hit for players used to higher velocity SEC pitching.

“He threw a lot of strikes, really didn’t give us anything, didn’t walk anybody,” Van Horn said of Barker. “It was a lot different from what we’ve seen. We knew that was coming. He did a nice job of keeping them in the game. He finally probably ran out of gas a little bit.”

With Barker in the dugout Arkansas added five runs in the seventh and three more in the eighth but managed to out hit the visitors just nine to eight.

If his teammates struggled at the plate at times clearly Franklin did not.

“I had a lot of practice with that (type of pitching) in the PT league this past summer when the quarantine ended,” Franklin explained. “The biggest thing is just getting a good pitch to hit. My approach to was to just kind of back the ball up and drive it to right field and center field.”

“He really stuck with the approach,” Van Horn said of Franklin’s big night. “He stayed through the middle of the field. He singled to center field. His double was to left center and obviously his home run was to almost dead right field.”

Van Horn said he warned his players beforehand that “anything could happen” coming off an emotional road series win at Ole Miss and facing a 2-19 team in a midweek game.

“I’m sure they’re a little bit physically and mentally tired,” the head coach noted. “It was one of those games where we didn’t do a whole lot but we didn’t let them do a whole lot either.”

Caleb Bolden got the win for Arkansas, going to 2-0 on the season. He gave up just one run in five innings of work while striking out nine batters.

“I mentioned it to the team afterward, Caleb got us off to a pretty good start,” Van Horn recalled. “He threw a lot of strikes, had a pretty good slider going. He was spotting his fastball and kept the ball down.”

With the win Arkansas moved to 27-5 on the season with another game against the Golden Lions set for 4 pm on Wednesday. Van Horn rested several of his players and said he plans to do more of the same in game two. “I don’t know who we’re starting honestly,” Van Horn said of Wednesday’s game. “I haven’t talked to (pitching) coach Hobbs but we’ll throw a little bit of everybody else.”

As for Tuesday’s game, Van Horn said, “I’m just glad that we played well, played good defense and got a win.”

No. 1 Arkansas Set to Host Struggling UAPB For Pair of Midweek Games

NO. 8 ARKANSAS EARNS COMMANDING 4-0 WIN OVER NO. 3 ALABAMA