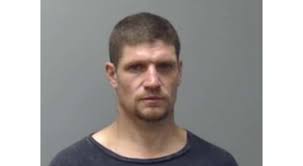 BAXTER COUNTY, Ark. – A Mountain Home man was arrested Wednesday on several outstanding warrants after being found hiding under a house.

A woman called the Baxter County Sheriff’s Office at 7:47 a.m. saying she discovered a person in the crawl space under her home.  After she found him the man then fled on foot.

Deputies got a description and were soon able to locate 30-year-old Michael Anthony Behrens near Highway 5.

Investigators say that Behrens was found to have multiple outstanding warrants and a drug pipe was found when he was searched.

After deputies checked the National Crime Information database, they also discovered he also has warrants in Covington County, Alabama for failure to appear in court on theft and drug charges.

Behrens was transported to the Baxter County Detention Center and charged with second-degree forgery, failure to appear, non-payment of fines, revocation bench warrant, criminal trespass, and possession of drug paraphernalia.

He currently has a $5,000 bond on the forgery charge but is being held without bond on the revocation warrant and the failure to appear warrant in Alabama.

Behrens will next appear in Circuit Court on March 11.