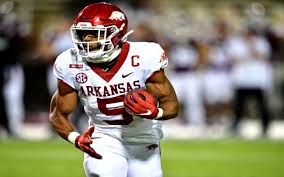 FAYETTEVILLE — Jonesboro’s Josh Hyneman is a standout for both the football and baseball teams.

The Class of 2022 recruit has committed to play baseball at Arkansas for Dave Van Horn. But he’s also a standout linemen on the Jonesboro squad that is 4-2 and coming off a big 38-13 victory over West Memphis on Friday night. On Saturday morning, Hyneman and his parents along with his two brothers made it to Fayetteville to watch the Razorbacks beat Ole Miss.

“I’m an offensive lineman so I really just watch up front pretty much until the game gets out of hand or I can tell what’s happening,” Hyneman said. “The offensive line impressed me and it’s hard not to get impressed by offensive line when it’s coached by Coach (Sam) Pittman.

“And something that stood out was just the defense. It’s crazy the amount of stops and they were just flying all around the field. Hudson Clark and stuff like that it just stands out.”

Clark is the hottest name in Razorback Football right now. What are your thoughts on him?

“That’s crazy, that’s crazy,” Hyneman said with wide smile. “I have seen so many posts and memes everywhere about it. It has been really good. Me and my buddy talked about him after the Auburn game. Hudson Clark, a walk on and he’s doing good. Like, wow, and the next week three picks. It’s just crazy. Me and my buddy were texting about it everytime he got a pick.”

Hyneman, 6-4, 240, and his teammates face a big football game this Friday when they host Searcy. The Lions (4-3) are the defending state champions in their classification.

“It’s gone really well,” Hyneman said. “We started off with (Little Rock) Catholic and we won it in the end. We lost a tough one to Cabot. Conway got the best of us. We lost our quarterback at halftime, Cross (Jumper), but Rykar (Acebo) stepped up well for the past three games now with Sheridan, Pine Bluff and West Memphis.

“It’s just I’m really proud of the way we’re playing. We’re really young, but we’re led by seniors. We have a lot of juniors and sophomores out there on the field, but the seniors are just doing a great job of keeping us all intact and getting us to War Memorial again in December.”

Hyneman, 6-4, 240, is ready to see Van Horn’s Razorbacks back on the baseball diamond.

“Man I couldn’t be happier,” Hyneman said. “Baseball season you love it. It’s one time in the year it just seems like everything is going right. You turn on the TV and you can find baseball anywhere. It’s just great to see the Hogs play.”

Hyneman will be a pitcher for Arkansas and talked about his strengths on the mound. He is an outstanding member of the Arkansas Sticks as well.

“I command the strike zone really well,” Hyneman said. “I work well in counts. I can get ahead quickly and go deep in games or I can come out of the pen and throw you one or two innings. Whatever you need.”

Hyneman is still drawing football recruiting attention. An SEC school reached out to him this past week. Any chance to you try football too in college since at one time that was somewhat of a consideration?

“I’m pretty heavy baseball, but football is always interesting,” Hyneman said. “I had a great time with it from my seventh-grade year to where we are now. It’s just that baseball has always been my first love. I love playing football. Just strap up and go out and play with my buddies that I go to school with and be competitive.

“I got a message on Twitter from the (Mississippi State) recruiting coordinator on Thursday, but we haven’t talked much since then. I wished them luck before the game. He’ll probably get back in contact with me later this week.”

Hyneman said he plans to return to Fayetteville when the Hogs play Alabama and possibly for a game before that.