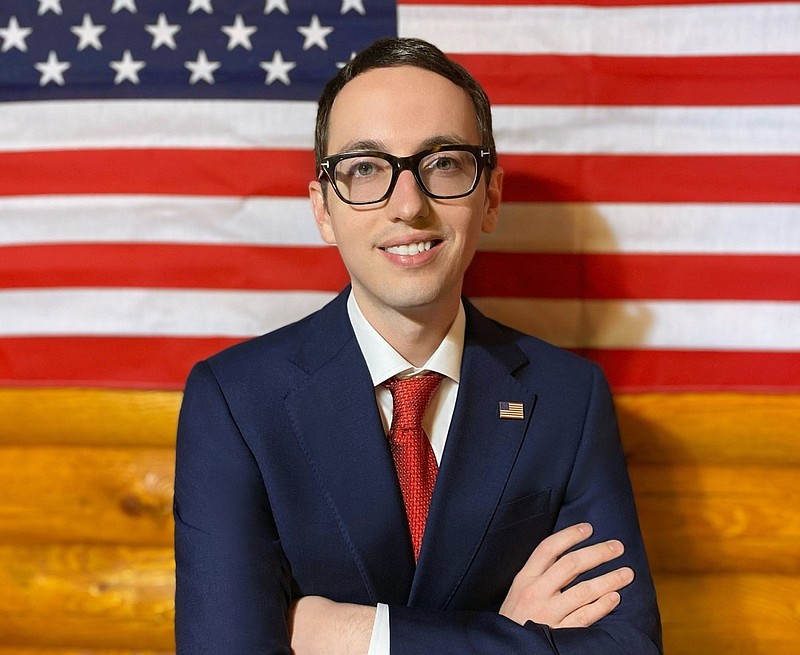 “If elected, I will be the first openly gay Republican senator elected to office,” he said. “Being gay and being a Republican, which is kind of a unicorn in this day and time, I felt like I could make a difference.”

Deel, 38, of Fort Smith said he was officially announcing his candidacy today for the U.S. Senate seat held by John Boozman, a Republican from Rogers who is running for reelection.

Deel said division is destroying democracy in the country and that he’s in a unique position to help bring people to common ground.

“I am a Republican, but on social issues, I lean left,” he said. “I want to protect everyone. I want to help everyone. But I will not go with this rhetoric about the election being stolen. I won’t stand for it.”

Deel said he will fight for all Arkansans.

“I believe that all Arkansans should be treated equally and given a fair opportunity to seek the American dream,” he said. “I think the government’s default position should be to stay out of our lives, and if we put petty partisanship aside and ignore the culture wars, we could solve actual problems facing our state and nation.”

Deel said Boozman claims to be an advocate of small government but has sponsored and supported legislation designed to make some Arkansans feel like second-class citizens.

“Early on in his career, he co-introduced legislation to prohibit gay marriage,” said Deel. “He attempted to define it in the Constitution. He proved to be soft on law and order by voting against a bill that would more strongly penalize people who attacked someone based on sexual orientation. He even voted against an anti-discrimination measure that affected members of the military.

“But Sen. Boozman has not just been hostile to the LGBTQ+ community,” said Deel. “He voted against ratifying an agreement that would protect the rights and dignity of persons with disabilities the year before he vocally opposed reauthorizing the ‘Violence Against Women Act.'”

Deel joins two others who have announced intentions to run in the May 24, 2022, Republican primary election: Jan Morgan, who owns a Hot Springs gun range, and Heath Loftis, a Baptist minister from Stuttgart.

Deel is a corporate analyst and political columnist. He has written guest columns for newspapers in Fort Smith, Conway and Russellville, as well as The Washington Times.

Originally from Breaks, Va., near the Kentucky border, Deel moved to Fort Smith in 2006. He has been married to his husband for almost 10 years.

From 2016 until this March, Deel worked at ArcBest in Fort Smith as an analyst and truckload fulfillment coordinator. He is taking leave to work on his campaign.

Deel said he became interested in politics while studying history at the University of Arkansas at Fort Smith in 2018.

“I saw the suffering, the division,” said Deel. “I just felt that I could make a difference.”

He said electing centrist candidates can bring the Republican Party back to its historical roots as the party of equality.

When asked why he didn’t run for school board or city council before U.S. Senate, Deel said he thought he could make more substantial changes on the federal level, particularly concerning civil rights and gay rights.

“Right now there’s no GOP representation,” he said. “You have to have it in both parties.”

“I think what’s happened is the Republican Party has lost everything right now,” said Deel. “They’ve lost the presidency. They’ve lost Congress. So they’re fighting a cultural war. ‘Your guns will be taken away. The gays are taking over’ …

Deel said Morgan ran for governor in 2018 against Asa Hutchinson and “lost in a landslide” in the Republican primary.

Hutchinson got 70% of the vote, according to the secretary of state’s office.

“She was not a viable candidate to win a statewide Republican primary,” said Deel. “She certainly would not be a viable general election candidate with the revelations from multiples news sources that she does not allow Muslims on the gun range that she owns. This type of thinking is not welcome in the Republican Party nor anywhere else.”

Attempts to reach Morgan were unsuccessful on Friday and Saturday.

“Pastor Heath Loftis does not believe in the separation of church and state and even advocates for civilian usage of tanks on his website platform,” said Deel. “That seems safe, does it not.”

A paragraph on Loftis’ website, pastorheathloftis.com, reads: “Separation of church and state: Not in the Constitution by the way. I am not a Christian infiltrating government, rather, government has invaded the church.”

“I’m glad to have more people in the race,” said Loftis. “It affords Arkansans options for which they can identify who they believe the best candidate is.”

Deel said he stands by the comments he made on his website concerning the Second Amendment and “the state’s interference in the right to assemble.”

“What our campaign seeks to do is to awaken the conscience of Arkansans to the reality that government size is a direct correlation to the sins of the land (Proverbs 28:2),” Loftis said in an email. “We also would bring to light that the innocent blood (abortion) that has been shed demands that God intervene in judgment toward us, unless we repent and correct this ongoing genocide.”

Boozman is the senior member of the state’s congressional delegation. First elected to the U.S. House in 2001, he unseated Democratic U.S. Sen. Blanche Lincoln in 2010. He was easily reelected in 2016.

Boozman announced on March 6 that he was running for reelection. The announcement noted that he’s a fifth-generation Arkansan and former Arkansas Razorbacks football player.

“As your senator, I will remain a tireless champion for Arkansas, our values and our freedoms,” said Boozman. “As the son of an Air Force master sergeant, I will always have the backs of our veterans and service members. I proudly stand with our law enforcement, defend our Second Amendment rights, and oppose the left’s radical agenda seeking to silence our voices and fundamentally change our way of life. I will continue fighting for Arkansas’s working families and small businesses; and my efforts to support our farmers, ranchers and rural communities will take a backseat to no one.”

Arkansas’ other senator, Tom Cotton, is up for reelection in 2026.

Two candidates have announced plans to run in the Democratic primary for Boozman’s Senate seat. They are Dan Whitfield of Bella Vista and Jack Foster, a former Pine Bluff council member and convicted felon.

The filing period for the May 24, 2022, Republican and Democratic primary elections is Feb. 22 to March 1, said Kevin Niehaus, a spokesman for the secretary of state’s office. The general election will be Nov. 8, 2022.

“I will be term-limited at two terms and will take a 15% cut in salary to give back to Arkansans in need,” Deel said.