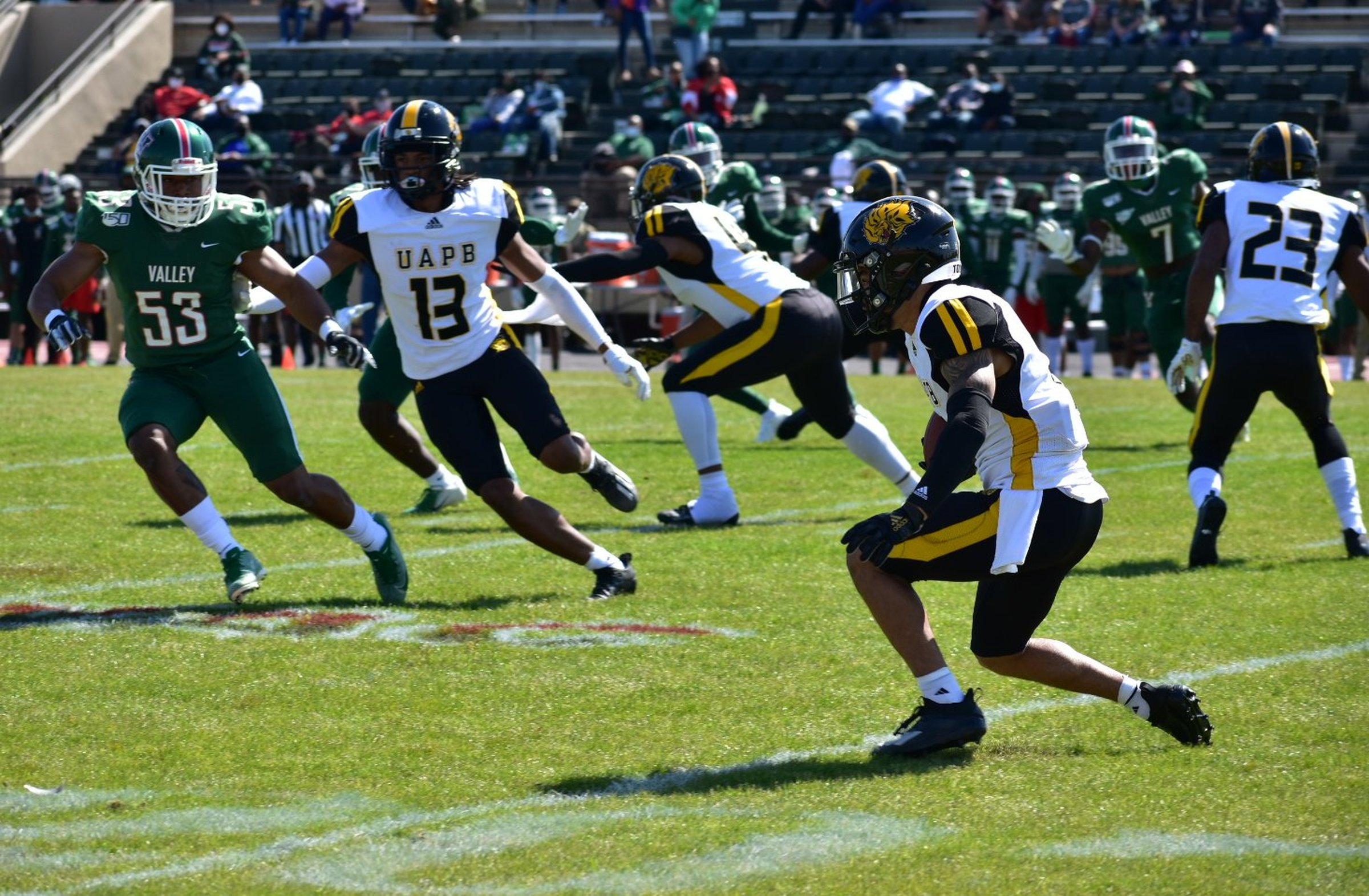 History, so far, is unfolding in the present at the University of Arkansas at Pine Bluff.

More than eight years have passed since the Golden Lions football program last won a Southwestern Athletic Conference championship, but the spring 2021 team can punch a ticket to the title game with a win over Prairie View A&M today in a battle of undefeated teams. Kickoff is at 3 p.m. at Simmons Bank Field on the UAPB campus.

A win will give the Lions (3-0 overall and SWAC) the Western Division title in the conference and would pit them against the Eastern Division champ on May 1 at the site of the team with the better record. Alabama A&M and Alabama State will play tonight in Birmingham for first place in the East.

The hopes of a title haven’t exactly made for coach-speak in Pine Bluff. First-year Coach Doc Gamble said “I don’t know” when asked what the vibe inside the Lions’ locker room has been like knowing that more history is at stake.

“We haven’t talked about it,” he said. “We’ve just talked about being 1-0 this week. I haven’t discussed it at all. They may have heard it, but I tell them to reduce the outside noise, clear the clutter and let’s just look forward to our next opponent.”

Senior receiver and return man Tyrin Ralph, whose game-winning, 77-yard punt return at Mississippi Valley State kept UAPB unbeaten, said the locker-room mood has been the same since the start of this six-game spring.

“We know what the standard is, and that’s the championship. But we go about it week by week,” he said.

The Lions are enjoying their fastest start to a season in at least 21 years.

“It’s no pressure,” Ralph said. “It’s the same energy we have at the beginning of the season. We know what’s at stake. We just prepare for the whole week.”

If UAPB doesn’t win today, the Lions will get another crack at the West title at home next Saturday in the regular season finale against Texas Southern.

The Lions will try to finish a game in Pine Bluff for the first time this season, since the March 27 game against Alabama State was stopped because of inclement weather late in the first half and declared a no-contest.

“We’re still looking forward to just playing football here on Saturday,” Gamble said. “Hopefully, we get a good turnout, and I know we still have limitations as far as who can be here with the fans and so forth. As long as there is a team on the other side, we’re looking forward to playing.”

Although Prairie View is 2-0 overall and in the SWAC, the Panthers cannot win the division or go to the championship game. The program is ineligible for the championship because of a low Academic Progress Rate under NCAA policy.

Former UAPB offensive coordinator Eric Dooley is in his third season as the Panthers’ head coach, and he’s leading the team into its first game in five weeks because of covid-19 issues within the program. Dooley was on the 2012 Golden Lions staff led by Monte Coleman that tasted a SWAC championship, as was current Panthers defensive coordinator Henry Miller and offensive coordinator Damon Nivens.

“We talked a little bit about that with the coaches being there, and they were successful,” Gamble said. “That’s why they were here. We’ve just got to make sure that we’re successful while we’re here and with the group of guys we do have. We don’t want those guys [from Prairie View] to leave out of here happy on Saturday.”

The Panthers have beaten SWAC bottom-feeders Texas Southern 20-19 on March 6 and Grambling State 17-10 on March 13, but they’ve given up the fewest points in the conference at 14.5 per game. The Panthers rank second in total defense (317.5 yards per game) and passing defense (191 per game), and they are third in rushing defense (126.5 per game).

That may pose a challenge for UAPB’s ground game, which produces only 121 yards per game. UAPB’s Mattias Clark averages 46 yards per game, 11th in the SWAC this spring.

Panthers linebacker Storey Jackson leads the SWAC with 18.5 tackles per game and has forced a fumble, recovered a fumble and intercepted a pass. Defensive lineman Jason Dumas has three sacks for the Panthers, tied for second in the SWAC with UAPB defensive end Xavier Mitchell.

T.J. Starks and Trazon Conley have shared time at quarterback for Prairie View, and both have thrown for more than 200 yards on the season.

“They’re kind of similar,” Gamble said. “They can beat you both throwing and with their legs. When you play two quarterbacks, you try to maximize their strengths as well as hide their weaknesses.”

WHAT MUST UAPB DO?

The offense is coming off its lowest point total of the season (17 at Mississippi Valley State), as Ralph returned a punt for the winning touchdown in a 24-17 win April 3, but averaged 40.5 in wins at Southern and Grambling State.

To have success against Prairie View, UAPB must “score a bunch of points,” Gamble said. He often says the Lions expect to score every time they possess the football.

But he said part of the limited scoring against Valley was because of Perry being knocked out of the game temporarily with an ankle injury on a near-touchdown reception just before halftime.

“It changes a whole lot,” Gamble said. “Once we got into a rhythm, we got out of rhythm. Skyler gutted that game out against Valley. … He’s tough as nails. He just managed the game for us the second half against Valley.”

Simmons Bank Field ticket booths and gates will open at 1 p.m. Centers for Disease Control and Prevention guidelines will be enforced, and masks will be required at all times unless consuming refreshments.

What: SWAC game against Prairie View A&M (2-0 overall and SWAC)

*– Prairie View is ineligible for SWAC championship. Alcorn State has forfeited each of its spring games because of covid-19 concerns.