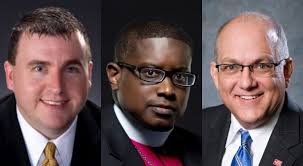 Act 18 of 2021 increased the number of board positions from five to seven and extended board appointments to seven-year terms. It follows the addition of Henderson State University, ASU Three Rivers and ASU Mid-South to the system in 2021, 2020 and 2015, respectively.

Rowton succeeds Stacy Crawford of Jonesboro; his term expires in 2028.

The two new positions have shorter terms only for initial appointments. Rudolph’s term is six years, and Eddington’s term is five years.

Rowton is a 1998 A-State graduate and has a bachelor’s degree in marketing. He is executive vice president of GES Inc. and a partner in Fast Lane Markets LLC.

He and his wife are 1924 Sustaining Life Members of the A-State Alumni Association and are members of the Red Wolves Foundation.

Rudolph received a bachelor’s degree in political science in 1990 from Henderson State, where he served as student body president. He is expected to receive his Master of Public Administration degree from the University of Texas at El Paso this year.

Rudolph has 33 years of pastoral experience serving congregations in Arkansas. His secular career spans three decades in government, including service as a clerk for the Arkansas General Assembly, a congressional aide and a special assistant to the governor of Arkansas. Rudolph has also participated in the White House Roundtable of African American Faith Leaders.

Eddington was previously a communications executive at Alltel Corp., Alltel Information Services and Arkansas Blue Cross and Blue Shield. He is a former sports writer for the Arkansas Democrat and was sports information director at Henderson.

In addition to serving as president of the alumni association, Eddington is a life member of the H Club and a member of Sigma Tau Gamma at Henderson.