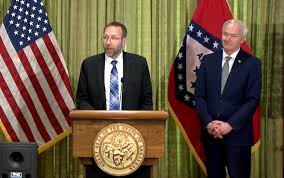 In Tuesday’s news conference, Dr. Nate Smith, Secretary of the Arkansas Department of Health, said the second person was also in central Arkansas and was in their 50s.

According to Dr. Smith, at least one of the deaths was due to an underlying health issue.

Neither of the people was in nursing homes, and neither cases were travel-related, according to Dr. Smith.

When talking about the cases in Arkansas as of Tuesday afternoon, Smith said there were 218 cases, which is 44 more since the last news conference was held Monday afternoon.

Smith noted the state was seeing more positive results from private labs than ADH for the first time.

There are currently 14 hospitalized with six on ventilators.

Thirty-eight people with the virus are in nursing homes.

There were first cases in Pike, Hempstead and Cross counties on Tuesday.

Dr. Smith urged people and funeral directors to think about ways to honor loved ones without spreading the virus.

Smith suggested having smaller family gatherings outside and scheduling larger memorials for a later time.

Smith also said there is evidence that smoking is a significant risk factor for serious illness and death from COVID-19.

Smith also noted a miscommunication with some employers, saying employees needed to be screened for symptoms, not tested.

According to the governor, the stockpile, along with 1 million units from an order the state placed that is expected later this week, would cover the state for the next 60 days with the current usage rate.

Governor Hutchinson also said he wants the special session to start Thursday, but the proclamation will not be issued until they have a majority of support for what is needed out of the session.

Dr. Jennifer Dillaha, the ADH Medical Director for Immunizations and Outbreak Response, warned people, especially young adults to practice social distancing and to avoid unnecessary trips to the grocery store or other businesses.

She also encouraged Arkansans to not be too isolated and to keep in touch with each other.

Dr. Smith also announced Tuesday of a platform being added to the ADH lab which could result in additional tests.

Smith said the new platform would be quicker results, possibly within an hour.

The turnaround time for the current platform is six to eight hours.

Dr. Smith said because Arkansas is a more rural state than others, we can expect a slow ramp-up and slow decline.

The ADH Secretary said those were good because the peak numbers of hospitalizations are expected to be lower, but the process is expected to be a little longer.

Officials say 7 people have recovered from coronavirus in Arkansas