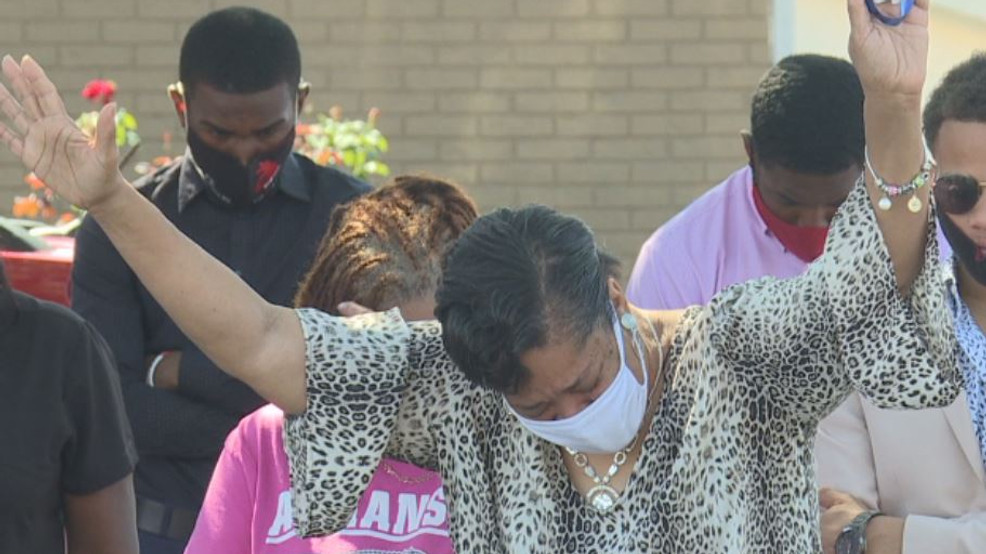 Pine Bluff, Arkansas – Dozens of law enforcement officers and members of the Pine Bluff community gathered on Wednesday to honor Detective Kevin Collins and his family.

Collins, a five-year veteran of the Pine Bluff Police Department, was shot and killed while responding to a call at Econo Lodge on North Blake Street on Monday.

The group returned to the scene of the crime to pray and pay their respects.

“He loved this community and loved law-enforcement,” Collins’ mother Dornetta Collins Hobbs said. “He wanted to be a police officer since he was three years old.”

Pine Bluff Mayor Shirley Washington was among those in the crowd. She said Det. Collins was like family to her. “On a daily basis, he would tell me, ‘I love you’ and sometimes don’t think we do that enough.”

“When he raised his right hand and took that oath, this young man took off running,” he said. “He was the kind of officer where there was no end to his shift.”

Sergeant said Monday’s radio call is one he’ll never forget. “We couldn’t really make out what it was, and then you hear officer down,” he said. “Your heart drops.”

Family and friends say Det. Collins is leaving behind an incredible legacy.

Collins Hobbs said she’s now asking for the community to step up, so no one else will have to feel her pain.

“I think my son would want the community and the whole city of Pine Bluff to pull together and do something about the crime in this city,” she said.

Members of the Pine Bluff Police Department and the community presented Collins Hobbs with a cross memorial at Wednesday’s gathering.

“All I can say is his living is not in vain,” she said. “He died doing what he loved to do.”

The prayer service was organized by church leaders in the community.

Visitation for Kevin Collins will be held 5:30 p.m. to 8:00 p.m. Friday, Oct. 9 at New Life Church in Pine Bluff. Funeral arrangements for Collins have been set for 3 p.m. Saturday, Oct. 10 at the convention center in Pine Bluff. The service is open to the community.