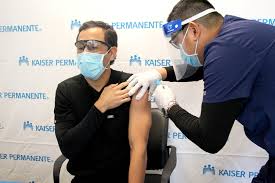 Public health experts Thursday blamed vaccine shortages around the U.S. in part on the Trump administration’s push to get states to vastly expand their vaccination drives to reach the nation’s estimated 54 million people age 65 and over.

The push that began over a week ago has not been accompanied by enough doses to meet demand, according to state and local officials, leading to frustration and confusion and limiting states’ ability to attack the outbreak that has killed over 400,000 Americans.

Over the past few days, authorities in California, Ohio, West Virginia, Florida and Hawaii warned that their supplies were running out. New York City began canceling or postponing shots or stopped making new appointments because of the shortages, which President Joe Biden has vowed to turn around. Florida’s top health official said the state would deal with the scarcity by restricting vaccines to state residents.

The vaccine rollout so far has been “a major disappointment,” said Dr. Eric Topol, head of the Scripps Research Translational Institute.