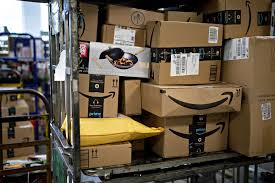 INDIANAPOLIS — If you are sending or waiting to receive a package for the holidays, you might be waiting a while longer. In fact, it is possible millions of packages won’t arrive before Christmas.

13News has confirmed increased demand and chronic staffing shortages have created a massive backup that has hobbled the U.S. Postal Service’s ability to deliver packages on time, and part of the backlog is at the USPS shipping hub in Indianapolis.

The problem first came to light when 13News viewers began sending questions to our VERIFY team.

“Is it true that the USPS in Indianapolis has a huge backup of packages in limbo at the airport?” My package mailed in Fishers on 12/7 hasn’t moved,” wrote Deborah Frankel, who spent $21.01 on USPS priority shipping last week to mail a holiday gift to a friend in Colorado. “I’ve looked every day to see if it made any progress, but it hasn’t gone anywhere. And when I called the post office, they told me they know there’s a big backup.”

Lee Ann Canada is facing the same problem. She sent a priority mail package to her newborn granddaughter almost two weeks ago. The gifts have not yet arrived.

The USPS delivery tracking information for Canada’s package shows it departed the Connersville, Ind., post office on Dec. 4. Four days later, it was recorded as “in transit” and expected to arrive late. That was eight days ago. USPS has provided no update since.

“It’s definitely frustrating, but I know I’m not the only person mailing a package out right now who’s expressing this,” she said.

USPS admits it is overwhelmed

So why is a package sent by two-day priority mail still not delivered nearly two weeks later – and where is the backup?

She did, however, send a USPS statement that said “The Postal Service has experienced a considerable increase in package volume…We apologize for the inconvenience of late arriving packages and are working to minimize the impact to our customers.”

A few days later, the U.S. Postal Service issued a much more sweeping warning on its website. That alert says “USPS is experiencing unprecedented volume increases and limited employee availability due to the impacts of COVID-19.”

On Wednesday, 13News spoke with two supervisors at local post offices who provided much greater insight about what’s happening behind the scenes.

13News is not identifying the workers because they are not authorized to speak to the media. But their information provides USPS customers a much clearer picture of the challenges that post office workers are facing and the reasons their packages are not being delivered on time.

“Just throwing packages in the trucks”

The supervisors who spoke to 13News were blunt in their assessment of the current backlog impacting millions of packages.

“All priority mail is now running one-to-two weeks behind, but the post office won’t admit that. They won’t tell anybody anything,” said one of the supervisors. “And this isn’t just here in Indiana. It’s the entire country.”

The longtime postal service employee told 13News it is just package delivery that is backed up; letter delivery is running on schedule.

Asked about the packages from Frankel and Canada, the supervisor said, “There’s a really good chance it’s sitting at the [Indianapolis Post Office] airport annex right now. They are sending out eight semi trucks of packages a night. But they are getting 16 trucks a night, so they are really behind. My suspicion is the packages will eventually get there. I just have no idea when. If we keep our fingers crossed, they might arrive by Christmas, but there is no guarantee.”

The post office supervisor said post office workers are so inundated with packages, it has been difficult to keep track of them. “They’re so overwhelmed, they’re just throwing [packages] in the trucks without scanning them. It’s a big mess,” he said.

That would explain why Frankel and Canada are not able to see where their packages are currently located and which USPS processing center has most recently handled them. USPS priority mail packages are supposed to be scanned along every step of the shipping process, providing customers instant access to tracking information.

Customers not always told of delays

Another post office supervisor told 13News the post office has been struggling to retain and hire employees during the COVID-19 pandemic, resulting in a shortage of workers during the postal service’s busiest season. And the employee said staff members are not encouraged to tell customers the severity of the current shipping backlog.

“If they ask, we tell them shipping times might be longer than usual, but if they don’t ask, we’re not supposed to offer up that information,” the supervisor told 13News.

“I wish if they were experiencing a delay, they would have something in advance,” she said. “If they had the transparency in the beginning, I could have used a different carrier – UPS, FedEx, something – to alleviate the extra burden that’s being placed on the postal service. But I wasn’t provided that information.”

“If they knew about this, they should have said something sooner,” echoed Frankel.

The postal service expected to deliver 800 million packages last year between Thanksgiving and New Year’s Day. That number is expected to climb significantly in 2020 due to COVID-19 prompting more Americans to conduct their holiday shopping online.

“I have no idea how the post office is going to crawl out of this hole at this point,” one of the postal workers said. “They can’t get any new people to come in and help out during the holidays. At this point, all we can do is tell people to be patient.”

That’s what Canada is trying to do, attempting to remain both patient and optimistic about the package she shipped to her granddaughter.

“Maybe she’ll get her Christmas stocking by Valentine’s Day,” she joked.