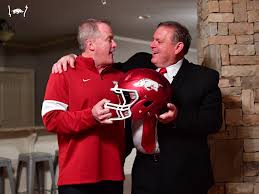 FAYETTEVILLE — Arkansas Vice Chancellor and Director of Athletics Hunter Yurachek explained the reasoning of breaking a long tradition of not playing Arkansas State in football and agreeing to face them on Sept. 6, 2025, in Little Rock’s War Memorial Stadium.

“Just a little bit of background on how this all came to be,” Yurachek said. “After the season Coach (Sam) Pittman and I sat down and talked about the future of our program and one of the aspects was his scheduling. One of the things he made abundantly clear to me through the course of that meeting was it was very important for our program to play as many SEC games as possible here on campus in Fayetteville.

“Shortly thereafter I reached out to (Heritage and Tourism) Secretary (Stacy) Hurst and started to have some very informal discussions with her about what it might look like if we were to move our Missouri games out of Little Rock and back on campus. Those conversations kind of heightened a little bit after the holidays and after she had a chance to talk to some of her constituents there in Little Rock. She was unbelievable in understanding what we’re trying to build with our football program here at the University of Arkansas and what we need to be successful.”

Yurachek credited Hurst with helping make all the changes happen.

“So I want to thank Secretary Hurst for really helping to bring this together,” Yurachek said. “She made it abundantly clear if the University of Arkansas was to continue to have a presence in Little Rock at War Memorial Stadium that she thought they needed to be meaningful games. As we started to talk about what meaningful games looked like obviously instate competition starting with our game the University of Arkansas at Pine Bluff this year and again in ’24 and working toward that game with Arkansas State in ’25, her and I determined those were meaningful games at War Memorial Stadium.”

Yurachek was asked about the ice breaker as far as the Arkansas State game and if anything beyond 2025 is in the works.

“Well, I’ll tell you right now it’s just 2025,” Yurachek said. “It was a challenging enough hurdle to get to 2025. I think the ice breaker is (Arkansas State AD) Terry Mohajir and I have been friends for a while. We were able to communicate and work through this, and I think the support of Chancellor (Joseph) Steinmetz that I received from him and our board and some of the behind-the-scenes things they did to help make this happen.

“I think we’ve proven in competition in other sports, with our baseball program playing our sister schools and playing Little Rock. We actually lost our first game to Little Rock, but we still went on to the College World Series that year. And we still had top recruiting classes. Things didn’t fall apart across our state because the Razorbacks were competing against other schools within the state. Just as we talked about a few years ago we were going to tip our toe in the water with our sister schools, I think the timing was right to just continue to expand what that looked like with completion with our in-state schools.”

In addition to debates about playing Arkansas State from fans, there’s also been some questioning to continue to play games in Little Rock.

“The one thing I’ve learned about the state of Arkansas since I’ve been here is that the Razorbacks are spread throughout this state, and our presence across this state is very, very important,” Yurachek said. “There’s not another major professional sports franchise. There’s no another Power 5 franchise. We have a presence in Central Arkansas. Our baseball team is there on an annual basis. In a normal year, our men’s and women’s basketball teams would be competing there. It’s important for our football team to be there as well. But those other sports compete in non-conference competition, not in SEC competition. The baseball stadium over there is traditionally sold out, and the basketball arena the last time our men’s team was there was soldout. I think once our football program gets to where I know Sam Pittman is going to being it, that War Memorial Stadium will be sold out for these games as well.”

But do you anticipate continuing to play in Little Rock beyond 2025?

In addition to getting Missouri back in Reynolds Razorback Stadium, the Texas A&M game played at AT&T Stadium is also gradually working its way back to Fayetteville every other year.

“What I will tell you is Ross Bjork and the folks at Texas A&M have made it abundantly clear that when the contract is over with AT&T Stadium, they would like to see those games back on campus following the 2024 season,” Yurachek said. “We would be next in line in the 2025 season to have the Texas A&M game back here on campus. Our home game is this year as well as in ’23. If you look at our schedule over the next five years, we have 20 SEC home games and 18 of those will be played here in Fayetteville. The two that will not be will be the two we play in Dallas at AT&T Stadium against A&M. After that, I foresee those games moving back on campus.”

Is it possible Arkansas could play a non-conference game in Arlington after the A&M series concludes?

“Whether we play some non-conference games, kind of those Kickoff Classics and things of that nature, at other venues like AT&T Stadium, I think that’s a definitive possibility,” Yurachek said. “Whether that happens over the course of a 10-year agreement again, probably doubtful.”

With the loss of revenues due to COVID, Yurachek admitted that was another determining factor in getting this new arrangement worked out.

“I wouldn’t be telling you the truth if I didn’t tell you that the finances of having another SEC game versus potentially an FCS game here are not significant,” Yurachek said. “But the No. 1 driver was the competitive advantage that Coach Pittman believes it has for his football program for us to play SEC games here on campus.”

Arkansas is coming off a 3-7 season against again an all-SEC schedule in Pittman’s first year. Arkansas State has a new head coach in Butch Jones who takes over a program that was 4-7 in 2020.