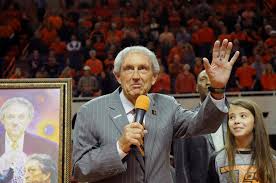 LITTLE ROCK — Iconic former Arkansas head coach Eddie Sutton, who on April 3 learned he had been selected to the 2020 class of the Naismith Memorial Basketball Hall of Fame, has died at the age of 84. He reportedly passed away on Saturday in Tulsa

Sutton recently took part in a Zoom meeting with a gathering of some of his former Razorback players and staff members. He will be formally inducted posthumously into the Naismith Hall of Fame during an enshrinement ceremony later this year in Springfield, Mass.

Despite failing health in recent years, Sutton managed to attend various Hog games, which included appearances for the Red-White game in October in venerable Barnhill Arena that he made famous in the 1970s and ’80s as well as the Arkansas-Kentucky game in January at Bud Walton Arena.

Sutton — he was already a member of the national college basketball hall of fame — will become the third former Arkansas Razorback coach or player to be inducted into the Naismith Hall of Fame, joining Razorback icons in former head coach Nolan Richardson (inducted in 2014) and 1979 first-team All American Sidney Moncrief (inducted in 2019). Sutton became a legend in Arkansas coaching after leading the Razorbacks men’s progam to its first Final Four in the modern era of college basketball in 1978.

“What an incredible honor for Coach Sutton,” first-year Arkansas head coach Eric Musselman told Hogville.net when news broke that Sutton would be enshrined into Naismith’s. “He has meant so much to the game of basketball and is looked up to by so many coaches across the basketball community.”

Sutton coached the famed Triplets — Moncrief, Ron Brewer, and Marvin Delph, a trio of 6-4 guards and Arkansas natives — to the 1978 Final Four in St. Louis, where the Hogs lost in the national semifinals to Kentucky before defeating Notre Dame in the Final Four consolation game on a deep, buzzer-beating fadeaway jumper by Brewer. The following season with Brewer and Delph having departed, Sutton and Moncrief led Arkansas to the Elite Eight, where the Hogs would fall to Indiana State and Naismith HOFer Larry Bird on a buzzer-beater in a game that would preview two future NBA greats in Moncrief and Bird.

Walker, the second-year head coach at Arkansas-Little Rock who starred for Sutton at Akansas (1980-83) after transferring from Westark Community College, was with his college coach at his family home in Oklahoma on April 3 when news came that Sutton would receive the Naismith HOF honor.

Kleine, who starred for Sutton at Arkansas (1982-85) after transferring from Notre Dame, was relieved to see the day had finally arrived that Sutton was honored with a Naismith HOF nod.

Over the years Sutton returned to Arkansas to attend games at Bud Walton Arena, as an opposing coach but more often as a spectator, including most recently for Arkansas’s 1980s-throwback-themed Red-White game that was played at Barnhill in October 2019. Earlier in 2019, the University of Arkansas named the gym in its basketball performance center the Eddie Sutton Men’s Basketball Practice Gym.

Sutton left Arkansas following the 1984-85 season to accept the head coaching job at Kentucky, where in four seasons (1985-1989) in Lexington he compiled an 88-39 overall record (.683 winning percentage) while reaching one Elite Eight (1986) and one Sweet 16 (1988) and winning two SEC regular-season titles (1986 and 1988) before leaving after the ’88-89 season amid a player-payment scandal and other alleged infractions that eventually led to an NCAA investigation, probation, and sanctions for Kentucky.

But Sutton would be out of coaching for only a year, landing at his alma mater Oklahoma State for the ’90-91 season. Sutton coached at OSU — a program that had made postseason play only three times since 1957 prior to his arrival — for 16 seasons as he finished with a 368-151 overall record, the aforementioned two Final Fours, two Elite Eights, three Sweet 16s, 13 NCAA tournament berths, and 1 Big Eight championship (1991) to go with one Big Eight coach of the year and two Big 12 coach of the year honors.

“He required that you respected the game,” said Arkansas assistant coach Corey Williams, who played for Sutton at Oklahoma State in the 1990s before being drafted by both the NBA and NFL. “He wouldn’t let you disrespect the game by taking plays off. He wanted you to play hard for the duration, and this was not something that he had to repeat over and over. He said it once and you knew he meant it, and you better give it back to him. But he also loved on you, made sure you had whatever you needed.

“He pushed you every minute, every second, on that basketball court because he saw more in you and what you could accomplish than what you saw in yourself.”

Sutton began his NCAA D1 head coaching career at Creighton (1969-74) where he was 82-50 with an NCAA tournament appearance (1974) before accepting the Arkansas job, and he ended his career as the interim head coach at San Francisco where he coached in 19 games in a portion of the 2007-08 season, finishing with a 6-13 overall record that allowed him to surpass 800 career wins as a D1 head coach.

Arkansas Recruiting 2021: 5 targets and how June could be a telling month