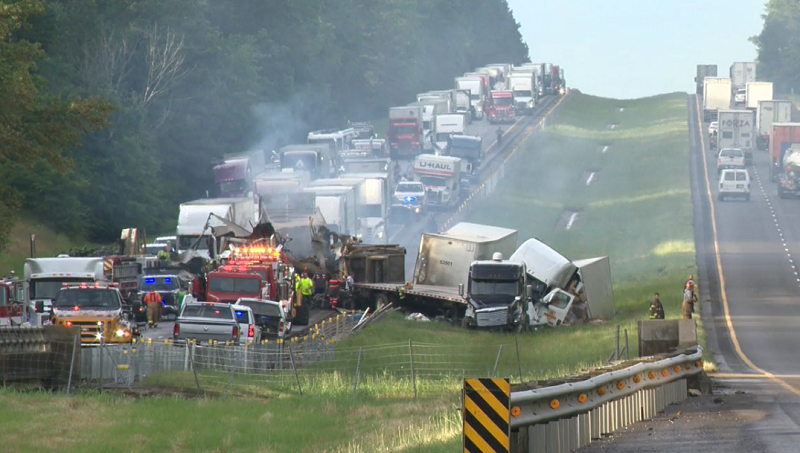 Clark County, Arkansas – After a fiery crash on Interstate 30 westbound near the Caddo Valley killed three people and 11 were taken to an area hospital, traffic is moving again.

According to Arkansas State Police, multiple crashes caused both lanes to shut down on Wednesday. They’re continuing to investigate three separate crash scenes, they said.

According to Dave Parker with the Arkansas Department of Transportation, their crews had to focus on the stretch of road that was damaged. He said there were ripples and waves in the pavement from the fiery crash, they had to dig up the road, smooth the street out, and then repave it before ARDot could reopen the interstate.

On Thursday afternoon Parker said they were able to reopen the inside lane of I-30 where the crash took place. “We do have the inside lane repaved and it’s now been reopened, traffic is moving at about 25 to 30 miles an hour,” Parker said.

He would avoid driving in the area of I-30 westbound if possible, Parker said. “If that’s impossible you know you’re gonna have to take detours routes at mile marker 98 to get over to 67 which takes you in around like Malvern, Social Hill, that area,” he said.

The traffic backup was an issue for Joe Short and his wife. They were heading home to Glenwood after helping build a church in Star City when his wife heard a noise. “The tire blew just as we were taking the exit so we were very fortunate,” Short said.

They tried to take a detour route toward the Hot Springs exit when his tire blew out coming from Malvern, according to Short. “It was narrow and not wide enough for us and a tractor-trailer rig, we met several tractor-trailer rigs who had trouble getting by each other,” he said.

According to Short, his brother-in-law is expected to help him and his wife with their flat tire so they can get home safely.

For those who have to take the highway to be prepared to take an alternative route if necessary, Parker said. “Near the scene mile marker 86 roughly, the road was torn up from the tractor-trailers crashing, hitting one another. The fire was so intense and lasted for so long it literally melted a lot of the pavement,” he said.

Both lanes were open on Thursday evening that.