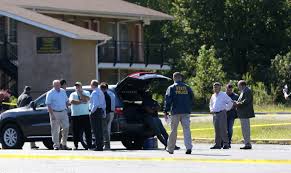 Pine Bluff, Arkansas –  The latest in Pine Bluff after a 5-year veteran, Detective Kevin Collins died after an investigation turned into a shooting.

Another officer and two other people also hurt.

The Jefferson County prosecuting attorney, confirming with us that Keshone Quantarious Smith, 19, has been arrested and charged with capital murder after the death of Collins.

Conyers police in Georgia confirmed he is also wanted there for murder and armed robbery in June.

We posted the news back in June after police said he could possibly be in Arkansas.

Two officers including Collins were shot. They were taken to a nearby hospital where Collins later died.

This all happened around noon Monday.  Collins joined the department in 2015 and was named officer of the year in 2017.

Tuesday a memorial has been growing outside the police department.

20-year veteran Lt. Ralph Issac was also shot but police say he is expected to be okay.  A third officer Kelsey Collins was also on scene but was not hurt.