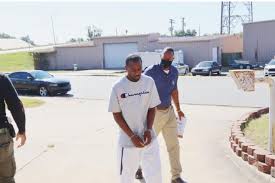 Smith was wanted by the Pine Bluff Police Department Detective Division for capital murder in the murders of 20-year-old Kavon Mitchell and 17-year-old Emonya Moten on Sept. 3, which happened at #25 Needles Street and 1704 S. Elm Street respectively.

In a separate shooting on Sept. 3 in the death of 69-year-old Horace Harrington on Lilac Street, Smith is also charged with capital murder.

The case was adopted by the U.S. Marshals Service Eastern Arkansas Fugitive Task Force.  On Friday, September 25, 2020, just after 2:30 p.m., the Kansas Fugitive Apprehension Task Force along with the Parson Police Department with the assistance of the Kansas Highway Patrol and the Labette County Sheriff’s Office took Smith into custody near a gas station on Main Street after receiving a tip of his whereabouts in Parsons – more than five hours from Pine Bluff.

Smith was booked into the Labette County Detention Facility, where he later waived extradition at which time JCSO was notified and began extradition proceedings to bring him back to Jefferson County.

Smith is currently being held at the W.C. “Dub” Brassell Adult Detention Center without bond on the above-mentioned charges and pending a first appearance probable cause hearing.

“The apprehension of Smith is yet another testament of the power of multi-agency cooperation, which is necessary to enhance community safety Sheriff Lafayette Woods, Jr. said. “Without the assistance of all the agencies involved and their efforts, Smith would still be on the run.”