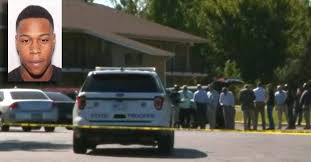 Pine Bluff, Arkansas –  A 19-year-old man who was wanted on a murder charge in Georgia has been arrested on suspicion of capital murder in connection with the shooting death of an Arkansas police officer, authorities said.

A hearing was set for Wednesday to determine whether there was probable cause to hold Smith on the charge in Collins’ death, Hunter told the Arkansas Democrat-Gazette.

Authorities have released few details about what led to Monday’s shooting at the Econo Lodge in Pine Buff, about 40 miles (65 kilometers) southeast of Little Rock, that left a second Pine Bluff officer injured. Police said Monday that two people were being questioned by investigators afterward but their names weren’t released.

Hunter said Tuesday that no one else has been arrested in the case.

Police in Georgia have said that Smith was wanted on a murder charge in connection with a June fatal shooting and robbery in the Atlanta suburb of Conyers.

“Officer Collins spent his 5-year career at the Pine Bluff Police Department protecting and serving his community,” Hutchinson said. ”He selflessly put his life on the line each day in the violent crimes unit and paid the ultimate price for the safety of others. We are forever grateful for his service and the dedication of our entire law enforcement community.”