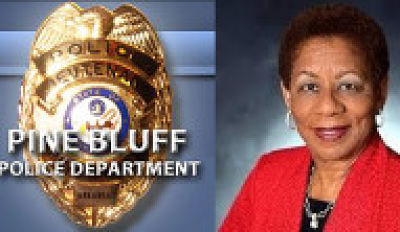 Governor Asa Hutchinson addressed the state live from Jefferson Regional Hospital Tuesday afternoon as part of his daily addresses on the pandemic. It was the first time Hutchinson has visited Pine Bluff since the outbreak began in March with a patient at Jefferson Regional.

Mayor Shirley Washington was on hand for the address, and stated that she had many concerns early on, but believes Pine Bluff has done “fairly well” at managing the pandemic as best as possible.

“One of my concerns early on with Pine Bluff and the community is that since we were ground zero for the first patient I wanted to see more aggressive testing for this area,” Washington said. “Personally I didn’t feel like we knew how well we were doing without tests. I feel like at this point we’ve done fairly well with managing this pandemic in our area.”

“Even though I do feel like Pine Bluff could have done a better job of social distancing, of wearing the masks, when you compare our numbers to other parts of the state we have done good,” Washington said. “I hope that we just continue to keep that count down as we move into phase two of this pandemic.”

Many local municipalities are having conversations in regards to how police departments operate since the murder of George Floyd in Minneapolis. Washington said there are already some things in place with the Pine Bluff Police Department that help with racial sensitivity, but there are some other things that could be added.

“With our police department I’ve asked if there are things that we can do that are in line with racial sensitivity, and he is looking at that,” said Washington. “There is an initiative that is going across the country right now that I shared with him over the weekend that’s called Eight Can’t Wait. That is where you have those eight bullet points of things that can happen and be in place in your police department. We are happy to say that most of those are already being implemented by our department, so we are looking at the two or three that are not. If we bring those in, we can implement all eight of those.”

Some cities are considering defunding their department. Washington said she has had conversations with Pine Bluff Police Chief Kelvin Sergeant, but a defunding of the department is not on the table.

“We’ve talked about defunding, which is what a lot of people are talking about across the country,” said Washington. “We don’t see where we can do that because our police department has been underfunded for so many years.”

While defunding the police department isn’t on the table, there may be some other plans that could be put into place.

“We might look at a citizen review board where we’ve have a peer review board in the past,” said Washington. “There will be some things we put together – hopefully a community task force – so we can get involvement from a cross section of citizens and employees to make some things happen to bring about some change.”