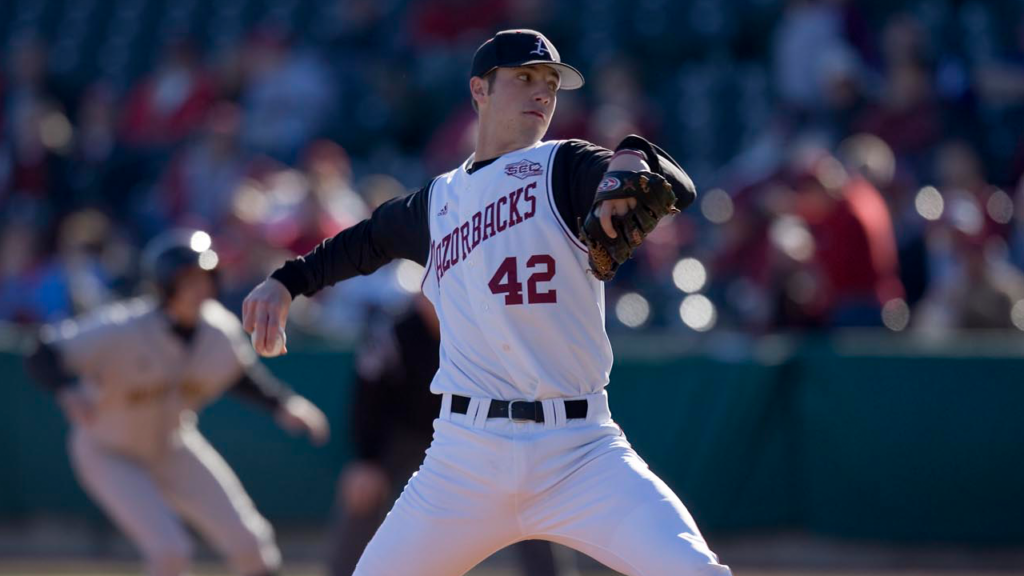 The Razorbacks were a solid all-around team in 2007, with pitching receiving a lot of the spotlight for their performance on the mound.

That team was one of Van Horn’s best in terms of individual pitching prospects. Two-time first-team All-American Nick Schmidt was taken by the San Diego Padres in the first round of the MLB Draft (No. 23 overall), the first first-round pick at Arkansas under Van Horn. Right-handers Jess Todd and Duke Welker were taken in the second round by St. Louis and Pittsburgh, respectively. Todd also earned second-team All-America honors.

Arkansas didn’t have the same 16-1 start as it did in 2006, but put together another 18-12 conference records with wins over Kentucky, Vanderbilt, Tennessee, Florida, Georgia and Auburn. This year’s 18-12 mark was good enough to claim the top spot in the SEC Western Division for the second time under DVH.

The Hogs had their best run through the SEC Tournament under Van Horn at that point as well, winning each of their first three games in Hoover featured 6-0 victories over both Alabama and South Carolina to earn a day off. Then, picked up another victory over South Carolina, 3-2, before falling to Vanderbilt, 7-4, to end their run at the tourney.

Hosting regional action for the second consecutive year and third time in four seasons, Arkansas welcomed in Albany, Creighton and Oklahoma State to Fayetteville. The Razorbacks opened with a 9-0 victory over Albany, but dropped the second game to OSU, 14-3. After a 6-0 win over Creighton to stave off elimination, Arkansas turned around to face Oklahoma State later in the day, dropping a heartbreaker 7-6 to end their season in regional play for the third-straight year.

The 2007 draft featured the most draft picks under head coach Dave Van Horn at the time and the most at Arkansas since 1985.

Schmidt, a native of St. Louis, Missouri, became Van Horn’s first Razorback to get drafted in the first round, after spending three years with the Hogs from 2005-07. Schmidt started most of his games in a Razorback uniform, starting all but two of his 54 appearances on the mound, with both relief appearances coming as a freshman. In 2005, he put together an 8-2 record with a 2.80 ERA over 99.2 innings pitched, striking out 89. He was awarded Freshman All-America honors and All-SEC accolades for his first season at Arkansas. His second season kicked off with a bang as well, starting game two of the year and worked with Brian McClelland and Devin Collis to combine for a no-hitter in a 3-0 win against Oklahoma State (Feb. 11, 2006). In 17 starts, Schmidt finished 9-3 with 145 strikeouts over 116.2 innings for a 3.01 earned run average, putting up the second-most strikeouts in a single season at Arkansas. Once again, Schmidt was even better in the next season, going 11-3 with a 2.69 ERA in 18 starts and 124.0 innings, the most in school history in one year, punching out 111. He wrapped his collegiate career with the most strikeouts by an Arkansas pitcher (345), the third-most wins (28) and the third-highest innings total (340.1). He’d also earn All-SEC honors for the 2006 and 2007 campaigns. Schmidt worked his way to High-A Lake Elsinore with San Diego, before getting assigned to the Rockies organization, spending one year with Double-A Tulsa in 2012 and two seasons at Triple-A Colorado Springs, wrapping his pro career at Triple-A Louisville in the Cincinnati system. He pitched in 138 minor league games, starting 94, with 449 strikeouts in 528.3 innings.

Welker, from Woodinville, Washington, transferred to Arkansas in 2007 from Seminole State, starting 18 games on the mound for Van Horn’s club. He put together a 7-5 record over 97.2 innings of work, striking out 80 for a 3.59 ERA. Before college, Welker was drafted in the 34th round, then went in the 39th round in 2005 after a year at Seminole State, both by Seattle. His showing under DVH helped propel him to a second-round pick with the Pirates. He spent eight years in the Pittsburgh system, making his MLB debut with the club in 2013. He pitched two games in the Bigs, working 1.1 innings with one strikeout and no hits or runs allowed. Welker would play his final year of pro ball at Triple-A Sacramento for the San Francisco Giants.

Todd, a native of Kilgore, Texas, also joined the Hogs as a junior after two years at Navarro College. He made 23 appearances, 13 in relief, putting together a 9-3 record and two saves with a 2.89 ERA. He rung up 128 batters, the third-most in school history, giving Arkansas two 100+ strikeout pitchers in 2007. The third Razorback to go in the first two rounds also reached the Major leagues, needing only three years to do so, pitching in one game in 2009 with the St. Louis Cardinals. However, he’d see more time that year with Cleveland, totaling 19 appearances in relief, striking out 18. He’s also pitch five times for the Indians in 2010 before spending the last five years with various Triple-A clubs before retiring in 2015.

Hamblin returned for his senior season and recorded 64 hits, 35 for extra bases, with a whopping 22 homers, the second-most in school history. Playing four years of college baseball with his amount of success lent himself to etching his name in the record books in several categories that may never been touched again. He played in a school record 246 games as a Razorback, registering the most at-bats by a Hog with 940, 60 more than No. 2, hitting the most home runs with 57, tallying the second-most hits at 284, the second-most RBIs with 219, finishing second in total bases with 522 and extra-base hits with 121, ranking third in doubles with 61 and fourth in runs with 202 and runs at 121. The Oakland A’s took  him a round later in 2007, as Hamblin spent two years with the club in different levels of Single-A ball before wrapping up his pro career.

Rhoads, an Arkansan from North Little Rock, pitched in 48 games during his time as a Razorback, 41 in relief. He won six games and recorded four saves, putting together a 4.14 ERA with 79 strikeouts over 87.0 innings of work. After getting drafted by the Phillies, Rhoads worked his way from Rookie ball to Low- and High-A clubs in 2007, pitching 21 times, all in relief for a 3.27 ERA. He spent his final two years of pro ball in the Independent Leagues with the Kansas City T-Bones, pitching 198.7 innings and 58 games, 34 in relief for a 10-10 record and 135 strikeouts.

Walker, from Tulsa, Oklahoma, played three years for the Hogs from 2005-07 behind the plate, totaling 164 games. He hovered around the mid .200’s during his time in college ball, posting 50 hits as a sophomore in 2006, 20 for extra bases. He saw his power increase as a junior, as 33 of his 49 hits went for extra bases, including 11 home runs. Walker’s pro career stayed in the Angels system, spending four years with the club. He worked his way through each level to hit Double-A and return to Arkansas with the Travelers, spending parts of three seasons with the club. In his final year, he played six games with Triple-A Salt Lake, wrapping his career back with the Travelers.

Julius, a native of Louisville, Kentucky, hit .309 his junior year with the Hogs, playing in 27 games, racking up 21 hits, four doubles and five homers, with 21 RBIs and 13 runs scored. He was drafted in the 33rd round by the Baltimore Orioles and spent five years in the clubs farm system, reaching Triple-A from High-A in 2011. He played in 351 games as a pro player, tallying 258 hits, 60 doubles, nine triples and 34 homers, with 155 RBIs and 157 runs scored.

Dugger, from Omaha, Nebraska, was a four-year player in the outfield from 2004-07, playing in 239 games as a Razorback, the third-most in school history. He earned Freshman All-America honors in 2004 after racking up 73 hits, nine doubles, three triples and eight homers, with 44 RBIs and 48 runs scored in 67 games for a .293 clip at the plate. After a tough sophomore campaign, Dugger rebounded to hit .317 in 59 games, tallying 66 hits, 24 for extra bases, including 12 homers his junior season, earning Second Team All-SEC accolades. As a senior, he had 59 hits, 14 doubles and six dingers, with 54 runs scored, finishing his collegiate career with 242 hits, the eighth-most in school history, including 162 singles, also eighth in the Arkansas record books and 34 homers, ninth in program history. After the draft, he would go on to play one year with the Vermont Lake Monsters in Low-A ball, posting 36 hits, 24 RBIs and 28 runs in 51 games.

Willard, a native of Doylestown, Pennsylvania, played two years for the Razorbacks in 2006-07, entering the draft as a sophomore. As a freshman, Willard hit .286 with 52 hits, seven doubles and two homers, with 20 RBIs and 27 runs scored. He tallied 41 hits the next year, nine doubles and a triple, scoring 41 times for a .293 average. He played three years in the Cleveland system, reaching High-A Kinston in 2009. He recorded 91 hits in pro ball, 10 doubles, three triples and two homers, with 32 RBIs and 47 runs in 139 games.

On May 25, we’ll take a look at the 2008 draft, which featured four Arkansas draft picks