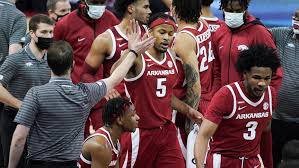 COLUMBIA, S.C. — Arkansas is playing its best at the right time of this season. Razorbacks coach Eric Musselman’s not sure where it leads, but he’s enjoying each winning performance out of his team.

Moses Moody tied his career high with 28 points and the 12th-ranked Razorbacks won their 10th straight in the Southeastern Conference with a 101-73 victory over South Carolina on Tuesday night.

Arkansas had it most 3-pointers in SEC play this season with 15 and matched the program’s last 10-game league win streak of the 1994 national champions.

“I thought tonight was as good as any game we played all year,” Musselman said.

Is there more ahead? Musselman’s not looking past the regular-season finale Saturday against Texas A&M.

But senior Desi Sills believes bigger things are ahead for this team.

“The way we’re playing right now, we can do anything we want,” he said.

Moody said the Razorbacks have worked too hard to make their mark to let their heads get too big due to comparisons to the program’s best teams.

“I knew with the players that were here and coming in, we could be special,” Moody said. “That’s what happened.

Moody and the Razorbacks (20-5, 12-4 SEC) did it with the long ball, hitting 15 3-pointers to continue its longest league win streak to match the 1994 national champions who won their last 10 SEC regular-season games that year.

The Razorbacks got going from way outside in the first half to open a double-digit lead that South Carolina (6-13, 4-11) could not overcome.

Arkansas, a middle of the SEC pack team in three-point shooting percentage, couldn’t miss in a first half that looked more like practice than an SEC game.

Leading scorer Moody hit three 3-pointers while Sills made his first four before he bounced a long one off the rim.

Arkansas made 20 3-pointers in its opening win over Mississippi Valley in November. It’s previous high in SEC play this season was 12 in a 99-69 drubbing of Georgia in January. And they used the long ball to pull away early.

Sills’ first 3-poiner put Arkansas up for good at 17-14. Moody made it 26-18 with his second three of the half. Even 7-foot-3 Connor Vanover got into the act, nailing an open shot from the right corner. By the time Sills made back-to-back threes, the Razorbacks were up 32-22 and wouldn’t be caught.

It didn’t help that South Carolina’s top two scorers in AJ Lawson and Keyshawn Bryant were a combined 4-of-20 shooting for 10 points the first 20 minutes.

Lawson led the Gamecocks with 18 points.

South Carolina coach Frank Martin was disappointed at his team’s shot selection and focus. “We just got run out of the gym,” he said.

Arkansas: The Razorbacks look poised to be a dangerous team this March. They’ve got outside shooting, a dynamic scorer in Moody and a strong inside game led by the quick senior in Smith. And Arkansas’ already has a victory over SEC regular-season champion Alabama to fall back on should the teams meet at the SEC Tournament next week.

South Carolina: The Gamecocks broke a six-game losing streak last Saturday at Georgia, but couldn’t find any momentum against the deep, talented Razorbacks. When Arkansas began hitting threes, South Carolina tried to match them. That’s not their game.

It was the 150th career win for Arkansas’ Musselman in six college seasons (four with Nevada, two with the Razorbacks)

One of Musselman’s biggest takeaways in this win? The 305 passes he said his team made in beating the Gamecocks. He typically likes to be above 200 for ball movement. This, he said, was impressive. “I don’t know that I’ve ever seen that in the college game,” he said.