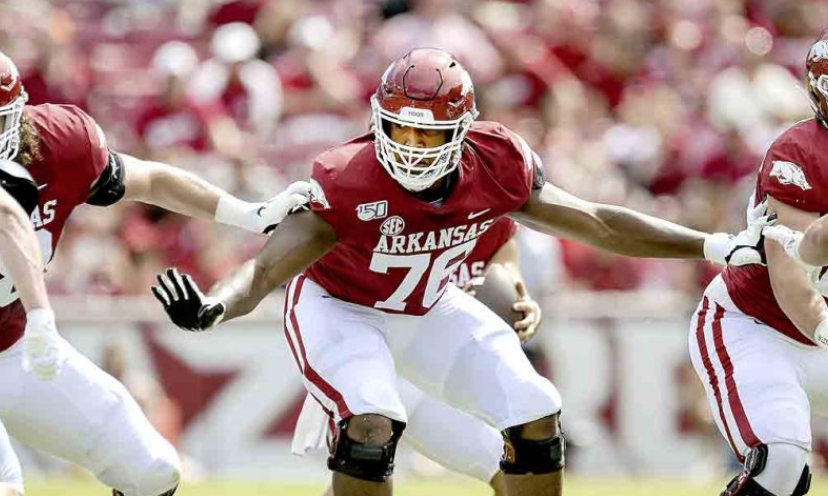 While Razorbacks Feleipe Franks and Rakeem Boyd generate many headlines on the offensive side of the ball, the Hogs’ top 2021 draft prospect rarely gets the same amount of buzz. Of course, such is life for most any starting life tackle who toils in near anonymity while skill position players get the attention. .

In his second year as a Hog after transferring from Iowa Central Community College, Cunningham has catapulted to the top of the list among likely 2021 NFL Draft Razorback prospects.

NFL Draft analyst Dane Brugler, who writes for The Athletic, said Cunningham is “at least the top draft-eligible prospect” on the Hogs. “I haven’t seen a lot of the younger guys. Of the guys eligible for the 2021 draft, the guys that I’m really focusing on for the cycle, he’s the best of the group.”

Brugler talked to me about what makes Cunningham, who put on 20 pounds of muscle this past offseason, a top prospect.

He started 10 games in 2019 and in 383 pass blocking plays allowed just one sack. He posted his best pass blocking grade with an 87.8 against Alabama.

“There’s a lot to like about him,” Brugler said. “He was a JUCO guy and he goes to Arkansas and wins the starting job. And he’s just been really reliable, really solid. Good size, 6”6’ around 325 lbs, good length, really like his hand strength at the point of attack. His movements in pass protection are very controlled, doesn’t make a lot of mistakes out there. I like his awareness, the way he can pick up rushers. He’s just a steady type of player.”