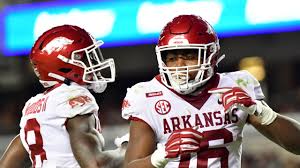 FAYETTEVILLE — Gone is Justin Stepp after three years coaching the wide receivers, but several famliar faces are back at that position.

Stepp got a chance to go home and coach wide receivers at South Carolina. Sam Pittman moved quickly to hire Kenny Guiton from Colorado State. Guiton worked with Kendal Briles at Houston in 2018 is touted as a good recruiter and coach.

While the coach is new he will inherit some talented wide receivers. The six leaders in receptions all return to Arkansas though just three of them are wide receivers. Treylon Burks caught 51 passes for 820 yards and seven touchdowns in nine games. Mike Woods followed with 32 receptions for 619 yards and five touchdowns in 10 games. De’Vion Warren played in seven games catching 15 passes for 278 yards and three touchdowns. All three return this season.