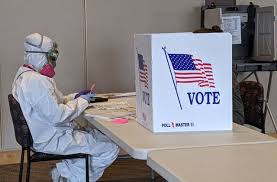 NEW YORK – In an unprecedented move, New York has canceled its Democratic presidential primary that was scheduled for June 23 amid the coronavirus pandemic.

The Democratic members of the State’s Board of Elections voted Monday to nix the primary. New York will still hold its congressional and state-level primaries on June 23.

Commissioner Andrew Spano said he had pondered at length, reaching a decision just Monday morning. He said he worried about potentially forcing voters and poll workers to choose between their democratic duty and their health. While there will still be other offices on the ballot, Spano reasoned it made sense to give voters an opportunity to choose in contested races but not to “have anyone on the ballot just for the purposes of issues at a convention.”

New York Democratic Party chair Jay Jacobs has said that the cancellation of the state’s presidential primary would mean a lower expected turnout and a reduced need for polling places.

“It just makes so much sense given the extraordinary nature of the challenge,” Jacobs said last week.