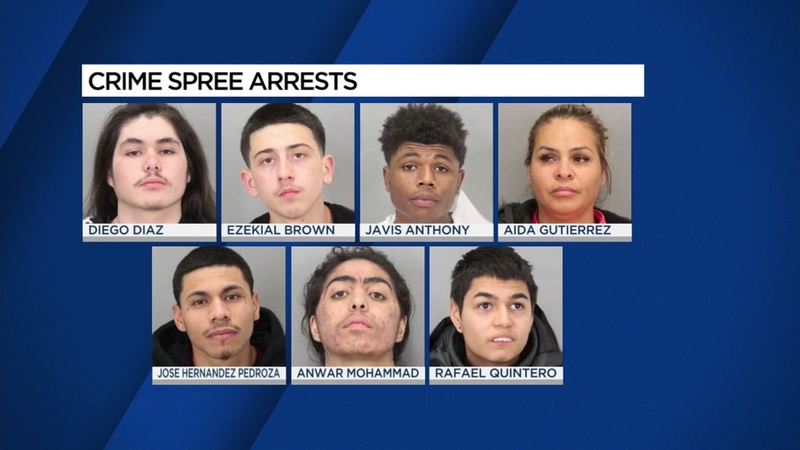 RICHMOND, Calif. – Nine suspects with ties to a Richmond gang have been charged in connection with a crime spree dating back months, authorities said Thursday.

The defendants have been implicated in a series of shootings, carjackings, home invasions, robberies and other crimes that happened throughout Contra Costa County, Richmond police and the FBI said at a news conference.

Many of the incidents were captured on surveillance footage.

Video shows muzzle flashes from four shooters, including some with assault weapons, who are opening fire on two rival gang associates at a Richmond apartment complex back in March.

Footage taken from another angle shows some of the shooters running toward their targets before taking off in a car.

“We were able to execute a series of search warrants to take those responsible into custody,” said Richmond Police Chief Bisa French.

Seven adults – including a brother and sister – and two juveniles have been charged by prosecutors. One has been charged with a carjacking in the Tara Hills neighborhood near San Pablo.

Other victims were robbed outside Costco in Richmond. A Concord home invasion victim lost $20,000 and a Rolex watch.

“This criminal street gang has terrorized our local communities for months until they were removed from our streets and arrested,” said Richmond police Sgt. Aaron Pomeroy.

Investigators said they seized guns as part of Operation No Fly Zone.”

“Two Glock handguns and an AR-15 rifle were seized,” Pomeroy said. “There were also high capacity Glock and AK-47 magazines.”

The alleged crime spree happened before – and during – the coronavirus emergency.

“During this difficult time and dealing with a health pandemic, the last thing that we wanted to do was to have to deal with a gang terrorizing our community,” French said.

Scott Schelble, an assistant special agent in charge of the FBI in San Francisco agreed, saying, “The fact that these investigators put themselves at risk during a global pandemic, risked themselves, risked their families to keep our communities safe, that’s the exact kind of dedication you can expect.”

Those charged in the case are Itorious Jones, Kolbert Mattie, his sister Myprecious Mattie, Graylen Hunt, Nyjay Maddox, David Godfrey and Brittney La Pierre. All but Maddox are in custody, with bail ranging from $2 million to $10 million.