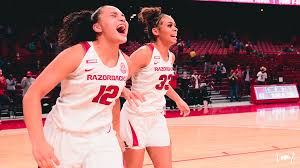 Redshirt senior guard Amber Ramirez once again led the way for Head Coach Mike Neighbors’ Hogs, tallying 18 points, all of which came by way of the three ball (6-14 3PT). Chelsea Dungee and Makayla Daniels joined her in double figures, scoring 12 and 13 points, respectively.

Arkansas got off to a great start in this one, jumping out to a 12-2 start, as both Ramirez and Dungee hit two early threes apiece. The trend would continue throughout the first frame, as Arkansas would close the period up 23-7, fueled by seven made threes. They only made one two-point field goal in the frame, and of their 17 total field goal attempts, 15 of them were from beyond the arc.

Arkansas returns home, as the run of in-state games begins with a showdown against UCA. That game will tip at 2 p.m. CT on Sunday, and will be streamable on SEC Network+.

For more information about Arkansas Women’s Basketball, follow us on Twitter and Instagram at @RazorbackWBB and on Facebook at Facebook.com/RazorbackWBB. Be sure to subscribe to our YouTube Channel, “Kickin’ It In The Neighborhood” for an inside look at the Razorback women’s basketball program and check out The Neighborhood podcasts at CoachNeighbors.com.