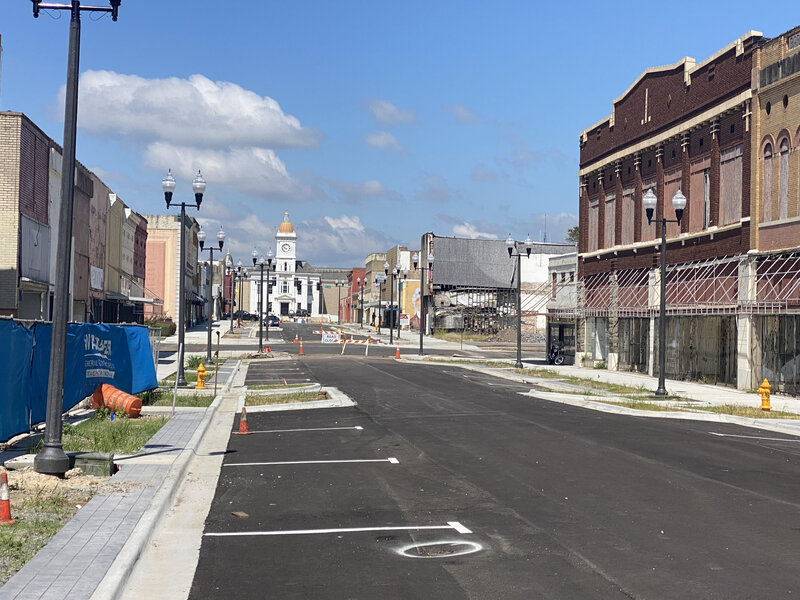 Pine Bluff, Arkansas – With the first phase of the Downtown Streetscape project nearing completion, Larry Matthews, the director of the Pine Bluff Economic and Community Development Department said Thursday that concrete has been poured between Barraque and Second Streets and now the street department and the contractors will be going in to mill down the street and pour new asphalt.

Appearing on the Oldies 101.3 morning show, Matthews talked discussed the first phase of the project.

He said this phase of the project will cost about $2.4 million, with money coming from grants, a bond issue and the Arkansas Highway and Transportation Department.

Matthews was also asked if the city owned any of the buildings in the area and said this:

He said the renovation work on those buildings is extensive because of a lot of structural damage and neglect with work including new roofs so that the buildings can, at some point, be ready for future business occupancy.

As phase one winds down, Matthews said the city is turning its attention to phase two with work on that phase to hopefully begin n the spring of next year. The cost for that phase is expected to be about $2 million.

Although not it the current plan, Matthews said the Mayor and some members of the City Council have shown an interest in extending work all the way to Harding Avenue in the future.

Pine Bluff inmate dies after being treated for coronavirus-related symptoms.