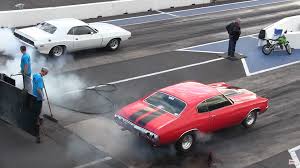 Pine Bluff, Arkansas – A nine-member ad hoc committee to investigate the possibility of a drag strip or racetrack in either the city or county was approved by the Pine Bluff City Council during their meeting Monday.

Sponsored by Council member Joni Alexander, the proposed racetrack or drag strip would help to improve the economy as well as help make Pine Bluff a “destination location.”

As it is written, the resolution gives the committee 11 months to come up with a written report and Alexander explained that time frame.

Under existing state law, the establishment of a racetrack is prohibited inside the city limits of Pine Bluff. The Mayor and each member of the City Council will select one member of the committee and there will be three ex-officio members, the chairman of the Traffic Aviation Committee which is currently Alexander, a representative of the Mayor’s Office and a representative of the Southeast Arkansas Economic Development District.

In other business, the council approved the reappointment of Lloyd Franklin Sr., and Jimmy Dill to the Urban Renewal Board, over the objections of Council Members Ivan Whitfield and Steven Mays. Whitfield voted no on both reappointments while Mays cast a no vote on Dill.

In explaining his reasons for voting no, Whitfield said he felt like the city was “recycling” people on committees and should give other people in the community a chance. Council Member Glen Brown Jr., defended the reappointments, saying that the Urban Renewal Board has only been in existence for about three years and none of its members have served a full term. He also said that the council has approved legislation allowing people to serve on boards and commissions for 10 years.

When it came time to vote on Dill’s reappointment, Mays said he did not feel like the Urban Renewal Board had acted “in the best interest of the city” and complained about the amount of money he said was being paid for one piece of property in the downtown area.

Mayor Shirley Washington told Mays several times he was out of order, but Mays said he was “the senior member of the council and he had the right to speak.” After Council Member Donald Hatchett asked to return to the business at hand, the Mayor cut Mays off and called for a vote which was six in favor of the reappointments, (Hatchett, Brown Jr., Alexander, Council Members Lloyd Holcomb Jr., Bruce Lockett and Win Trafford) and two (Mays and Whitfield) voting no.