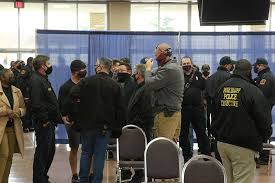 The Pine Bluff City Council on Monday will consider legislation allowing Mayor Shirley Washington to sign a lease with Saracen Casino for the new fire station that is being constructed near the site of the main casino.

Appearing on the Oldies 101.3 morning show, Washington talked about the new station.

Washington said the new station will replace what she described as “an older station. It’s the station in town that needs to be replaced the most and that’s the one on Commerce Road, Station No. 4.”

She said her understanding was that the station was built by firefighters many years ago and called it a “substandard station built more on a house scale than an up-to-date, state-of-the-art fire station that they’re about to move into.”

Washington said Fire and Emergency Services Chief Shauwn Howell was involved in the planning of the new station “so it’s going to meet the needs of our firefighters.”

Howell also appeared on the Oldies 101.3 morning show and said the station was very close to being ready for use.

Howell said the current plan is for firefighters to move into the new station around the time that the main casino opens.